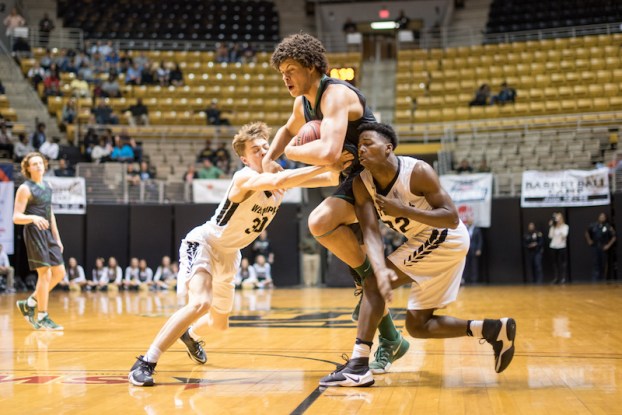 Pelham's Alex Reese has been named the 2016-17 Shelby County Player of the Year after leading the Panthers to the Elite 8 while averaging a double-double despite injuries and nightly double teams. (Reporter photo/Keith McCoy)

With one of the best senior classes this county has ever seen, making the decision on the Shelby County Player of the Year was a tough one. Four guys from one area alone could have taken home the top prize as Joseph Lanzi, John Brown, Alex Reese and Justin Allison all had fantastic years.

You also had guys like Jamal Johnson at Spain Park, Stephen Campbell at Vincent and Da’Shaunte Smith at Montevallo post crazy stat lines and all got very strong consideration.

When it came down to it, however, it was too difficult to go against Pelham senior forward, Alex Reese. For the second year in a row, the Alabama signee flashed signs of brilliance on his way to being named as the county’s player of the year.

A lot of you may think it was the easy way out to go with Reese, but it wasn’t just his stat line of averaging 21 points, 10 rebounds and 1.5 blocks, but what he battled through to average that.

His stat line was down from last year’s 25.4 points, 10.9 rebounds and 2 blocks per game, but for several reasons some people are unaware of.

With every team he and the Panthers faced came a determination of stopping Reese and making someone else beat them. He was often double teamed and sometimes triple teamed, but still couldn’t be stopped.

“I had to lock in mentally before games more,” Reese proclaimed. “It was tough because they always do come after me first, but being focused mentally was the difference maker.”

It took not only a lot of mental focus on his game, but his body as well. He missed five games in the month of December because of injury and was never 100 percent healthy the entire year dealing with knee issues. 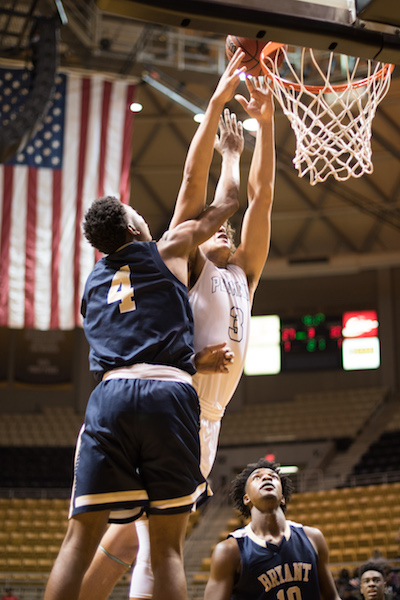 That, yet again, didn’t stop him as he battled through the pain and the double teams to average a double-double for the season.

“The experience of seeing those guys focus on him over the years was a difference maker,” Pelham head coach Joel Floyd said. “Being a senior, it was nothing new to him this year because he was so much more mentally mature.”

Reese also helped the Panthers battle through a rough patch around the same time he was injured. During this stretch they were playing some of the toughest teams, not only in the state, but in the country as they competed in the Steel City Invitational featuring several state champions and the Farm Bureau Classic in South Carolina.

Not many people new the level of talent they were facing or that Reese was sitting out, which led to a lot of trash talk of the then No. 1 6A team in the state.

The senior heard and read all of the negativity, but like a mature senior should do, he gathered his team and refocused them on a run to a championship to prove them wrong.

“We definitely talked about all that,” Reese said. “It wasn’t any type of negative energy for us, we flipped it to positive energy because we knew we were one of the best teams in the state.”

They went on to win the area championship over Helena and won their sub-regional and Sweet 16 matchups as well to give them 11 straight wins to prove the doubters wrong.

“It was a rough patch and a lot of that had to do with him being injured,” Floyd said. “Having leadership from him and his encouragement to keep the guys fighting and make them realize that once everybody was back we would be just fine was key. We went on to win every game the rest of the season until running into Paul Bryant.”

And while the sting of the double digit lead in the first quarter turning into a four-point loss in the end is still prevalent, Reese knows his team had an incredible run.

“I think we all wanted and expected of ourselves to get to the state championship, but as a team it was a good season and we were excited about our success,” Reese said.

While he did his best to lead his team and mentor young guys like Justin Allison, who will now have to fill big shoes, it’s time for Reese to embark on his next chapter of basketball at The University of Alabama. A daunting task for many, but something he is welcoming with open arms.

“Being able to play at the next level against SEC-caliber competition will be a fun challenge that I’m excited for,” Reese said of what he expects as he continues his career. “We get to play teams like Texas next year at the BJCC and playing against other big time teams around the country, that’s something I really look forward to.”

While the next level awaits just around the corner, he won’t be forgetting of the many lessons he has learned in his four years of wearing the Pelham green and gold where he racked up an overall record of 88-36.

From Staff Reports INDIANAPOLIS, IN — Hasaan Hawthorne, a former wrestler at Pelham High School, has been selected as the... read more