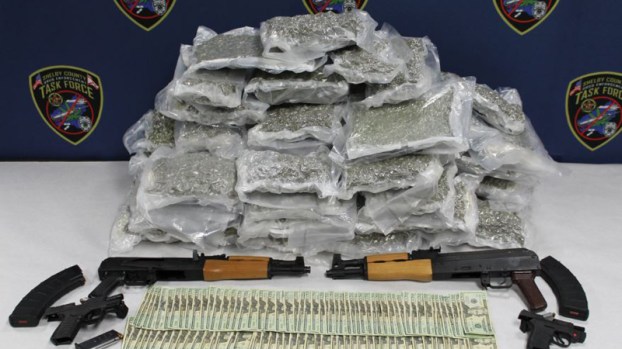 Investigators with the Shelby County Drug Enforcement Task Force seized more than 48 pounds of high-grade marijuana at the conclusion of a multijurisdictional investigation. (CONTRIBUTED)

COLUMBIANA – Investigators with the Shelby County Drug Enforcement Task Force concluded a multijurisdictional narcotics investigation that resulted in the seizure of more than 48 pounds of high-grade marijuana in the 3000 block of Highland Drive in Birmingham.

The Jefferson County District Attorney’s Office assisted the SCDETF with obtaining a search warrant for the residence of 24-year-old Joshua Christopher Burchfield of Birmingham.

Investigators then discovered more than 48 pounds of marijuana, packaged in vacuum-sealed bags, intended for concealment and transport.

Shelby County drug enforcement investigators placed Burchfield under arrest and transported him to the Jefferson County Jail, where he was charged with drug trafficking and unlawful possession of marijuana first degree.

“This was a successful operation, which is a testament to the partnerships we share with other jurisdictions and state prosecutors,” said Lt. Clay Hammac, commander of the Shelby County Drug Enforcement Task Force. “Regardless of the changing cultural perception of marijuana and the public opinion of the legalization of marijuana, the fact remains that it is illegal in the state of Alabama, and our team will continue to tirelessly pursue drug traffickers and dealers of all illegal drugs.”