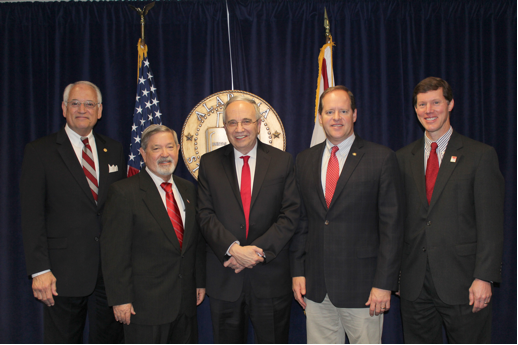 Tom Walker one of sixteen to plan US 250th commemoration

Tom Walker of Montevallo, founder and CEO of Alabama’s American Village history and civics education center in Montevallo, has been appointed as one of 16 citizens to serve on the United States Semiquincentennial Commission.

U.S. Senate Majority Leader Mitch McConnell appointed Walker to the new commission, which will make recommendations and plans to commemorate the 250th birthday on July 4, 2026. Its work will be similar in scope to the planning of America’s Bicentennial in 1976.

“I think the Commission is the best chance since the Bicentennial to rekindle both that knowledge and that interest around the country,” Walker said. “I remember in 1976, we’d come out of the Vietnam Era and come out of Watergate … and there was a great deal of division in the country. It was a chance to remind ourselves as Americans what we shared. I hope there’s the opportunity to do that and I hope also there’s a renewal to teach young people.”

Walker credited the staff of the village and the help he has received in making his vision a reality.

“I think the Village has earned a reputation as somewhat of a pioneer in the country in trying to reignite a knowledge and passion for the foundations of our country,” Walker said. “I think what we’ve done … word has gotten around and we’ve been privileged to help take it from an idea in my head to reality.”

Walker’s experience with American Village will inform his suggestions to the Commission, which will meet in Independence Hall in Philadelphia and hold hearings around the country.

Walker wants to host a hearing in Shelby County to bring the Commission to the American Village and show what the county has done to invest in young people to perhaps inspire similar action in other places.

“There will be things like fireworks and celebrations and all that, but this needs to be more than that. We really are at a critical point, I think, in our country. Forty percent of the public cannot name a single protection afforded by the First Amendment,” Walker said. “Unintentionally, American history and civics have been put on the back burner, and we’re now seeing the results of that.”

The Commission’s work is to be paid for by non-public funds.

In the early 1990s, Tom first advanced the concept of the American Village as a campus to teach and inspire young people in a better understanding of the foundations of American liberty and self-government.

It has taught and inspired over 600,000 young people from all over the Southeast through interactive history and civics programs.