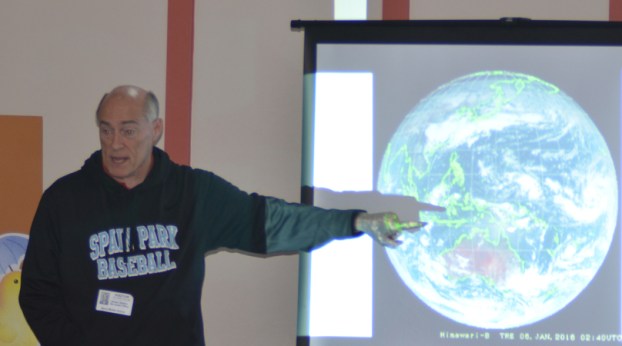 James Spann speaks about the science behind weather to an audience at the Albert L. Scott Library. (Reporter photo/Amalia Kortright)

Smith said Spann’s fame attracted many locals, and there was a lot to learn from his visit.

“A lot of the times, in our culture, people who are on TV are very popular,” Smith said. “He does science, math and he speaks in public, so he has a lot to teach people, in addition to meteorology and the weather.”

During the program, Spann talked about the basics of meteorology and forecasting weather, different types of weather instruments and severe weather safety.

“We packed a lot into 45 minutes, and I love teaching kids about weather,” Spann said.

Spann presents at schools in the Shelby County and Birmingham areas on a daily basis in order to share his passion for meteorology.

“There were some people who got me excited about weather when I was a child, and at my age, the least I can do is the same,” Spann said. “This is the best part of my day.”

“He told them to not be afraid of storms, but to just go to a safe place. He explained the science behind what people might perceive as scary weather,” Smith said.

Through his visits, Spann hopes to help fix what he sees as a scientific literacy problem among today’s youth.

“If I can spark some interest so they want to learn more and take it to the next level, then that’s a good thing,” Spann said. “A lot of our kids are brilliant, but they don’t always see the connection between math, science and the real world. This kind of ties it together. Very few of these kids are called to do weather, but many of them are called to do something involving science, engineering or technology.”

Smith said the program was originally intended for homeschooled students, but later opened the program to all students in the community. About 110 people attended.

“We invited the public at large. There are even adults here without kids,” Smith said.

While this is Spann’s first time speaking at the library, Smith said she plans to invite him back in the future.

“It was very exciting to have him here, and I hope that he comes back. He obviously has a lot of fans in Shelby County,” Smith said.