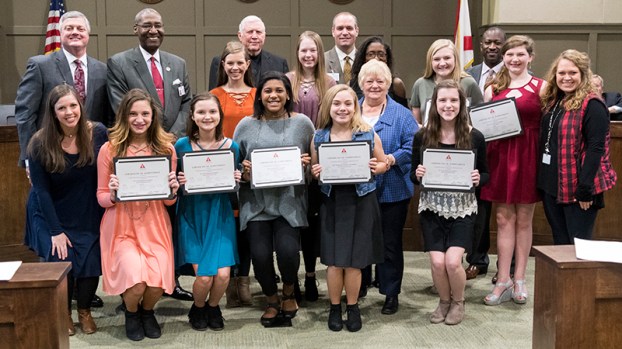 Members of the Thompson Middle School Warriorettes dance team are recognized by members of the Alabaster Board of Education during a March 13 meeting. (Reporter Photo/Neal Wagner)

ALABASTER – Not long after earning local, regional and national honors, members of the Thompson Middle School Warriorettes dance team again earned the spotlight during a March 13 Alabaster Board of Education meeting.

School Board members honored the Warriorettes during the meeting for their myriad accomplishments over the past several months, and presented each member of the team with multiple certificates in their honor.

The following girls were honored during the meeting:

During the past season, the Warriorettes earned the following awards:

-First place in the pom category

-Second place in the kick category

-Third in the kick competition

-Fourth place in the pom category

-Fifth in the kick category

By NEAL WAGNER / Managing Editor ALABASTER – Several Alabaster Board of Education employees earned praise for everything from serving... read more