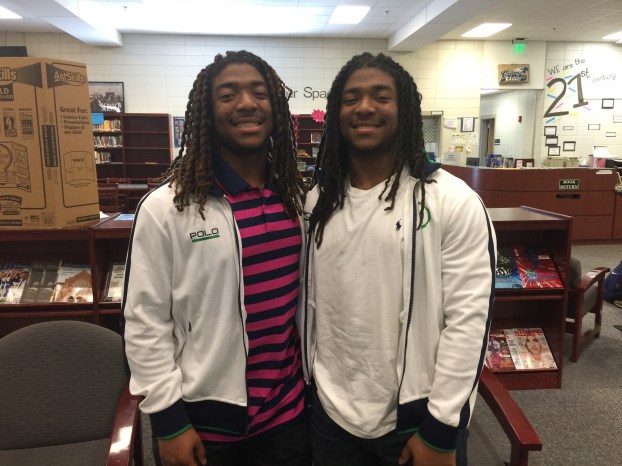 CALERA – Identical twins Alex and Jaramy Dozier found out in the ninth grade that they were ranked No. 1 in the class, and they remained tied in the No. 1 academic spot until the 11th grade.

“He made one B and then I pulled ahead,” Alex said.

Although they juggled sports on top of AP Government, AP Literature and AP Calculus classes, the twins said they don’t feel too overwhelmed. Impeccable time management, especially during football season, helps to keep them on track. Both played the positions of both running back and linebacker.

They also said they don’t overload themselves with more extracurricular activities than they can handle.

The twins plan to embark on their college careers at Vanderbilt University in the fall – Alex studying physical therapy and Jaramy studying electrical engineering.

Over the years, they said their mother has played a major role in keeping them on track academically.

“Mom is the enforcer,” Alex said. “If we don’t get good grades it’s not good.”

If the boys bring home a grade less than an A, they get grounded until the next progress report or report card comes out.

“She takes away our video games; that’s our biggest thing because we don’t really watch TV,” Jaramy said.

On the flipside, when the boys bring home all As, they’re rewarded monetarily. Jaramy said receiving incentives helps them because if one gets the incentive and the other doesn’t, then the one who didn’t get it feels left out.

“You know that there’s going to be bragging and everything and it makes you want to do better next time,” Alex said.

The twins said their competitive nature also pushes them to excel in the classroom and on the field as members of the football team.

“Any and everything we can use as a competition, we do,” Jaramy said. “Whichever one wins, the other is guaranteed to brag about it and trash talk.”

Whether it’s playing games on their PlayStation 4 or playing football, the twins said their competitive nature pushes them to do better.

“In my eyes, I’m pretty good on the field,” Alex said, comparing himself to Ray Lewis and Trent Richardson.

Then a back and forth banter ensued. “I’m more serious on the field,” Jaramy added.

“You’re not better than me though,” Alex replied. “Yeah, whatever,” Jaramy said.

The Doziers said they hope to play football in college also.