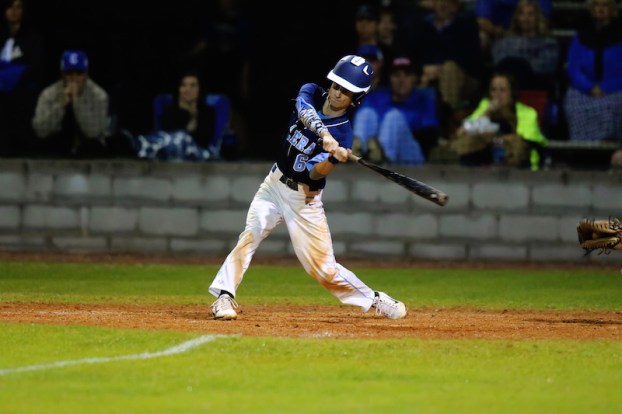 Will Glasscock went 0-2 in the game, but picked up two walks and scored two of the Eagles' 13 runs in the game. (For the Reporter/Cari Dean)

CALERA – After dropping just their third game of the season and giving up their most runs of the season in a 10-0 loss to Smiths Station on Saturday, the Calera Eagles rebounded with their second win of the season over Park Crossing on Tuesday, March 14.

The Eagles exploded for nine hits and 13 runs in a shortened five inning 13-3 run rule win. While the offense was busy scoring their most runs of the season, the pitching staff was back to its dominating fashion.

Kevin Dowdell got the start on the mound and picked up the win after going three innings giving up one run on no hits and picking up a strikeout in all but two of the nine outs he got. Park Crossing on the other hand went through four pitchers in the game as they couldn’t find an answer for Calera’s offense.

After being held scoreless in the first inning, the Eagles broke out in the bottom of the second scoring close to half of their runs in the inning. Tyler O’Clair and Quin Darius Crew picked up singles in two of the inning’s first three at bats. A groundout from Dowdell brought home courtesy runner Jermaine Ross for the game’s first run on a fielder’s choice.

With two outs in the inning, Calera was able to string together two walks, two doubles and a single over the next five at bats to score five more runs and take a 6-0 lead at the end of two after batting around the order. Jaxon Butterworth and Christian Hall picked up the two doubles and accounted for four RBI’s in the inning.

Dowdell came out and struck out the side in the top of the third to really put the hammer down and enforce the dominance that Calera came to play with.

The Eagles picked up two more runs in the bottom of the third and one in the bottom of the fourth to take a commanding 9-1 lead. Park Crossing tried to put together a little bit of a comeback in the top of the fifth as they scored two runs on a single and a double, but left a runner in scoring position to still trail 9-3.

Calera came out in the bottom of the fifth and put together four runs thanks to three walks, an error and a double. With Park Crossing only able to get one out in the inning before the Eagles grabbed a 10 run lead, the game ended due to the run rule.

Butterworth went 2-3 at the plate with two RBIs and two runs scored to pace Calera. Jacob Smith also had a strong game, going 2-3 with two RBIs and one run scored after he picked up two doubles in the game. Hall drove in a team high three runs after going 1-2 with a double and a walk.

Seven players had a hit in the game, while six picked up at least one RBI. Six guys also picked up a walk in the game, three of which picked up two free passes. The Eagles are now 8-3 on the season and one of the strongest 5A teams in the state.

By ALEC ETHEREDGE | Sports Editor PELHAM – An up and down season for the Thompson Warriors baseball team was... read more