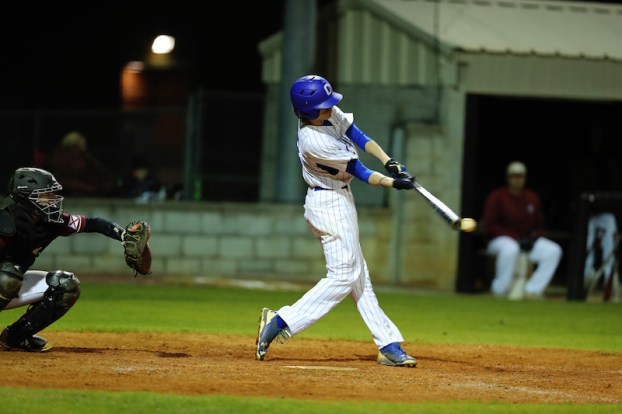 Chelsea was able to hold on to beat Montevallo after scoring seven unanswered runs over the first three innings. (For the reporter/Cari Dean)

CHELSEA – After losing back-to-back games to Briarwood the Chelsea Hornets have rebounded nicely with three straight wins after taking down John Carroll twice on Saturday, March 11, and Montevallo on Tuesday, March 14.

The Bulldogs have righted the ship since their early season struggles as their offense has steadily improved and actually outhit Chelsea 8-6 in this game, but the Hornets’ grabbed an early lead and were able to hand on over the final three innings for a 9-6 win.

The difference in the game ended up being the first three innings as Chelsea (10-4) came out hot and started the game with six unanswered runs.

After starting the inning with two straight outs, the Hornets picked up two runs due to an error, a single and a run scored during a run down that accounted for the final out of the inning. It took just one two-out hit to take a 2-0 lead after one.

Apparently Chelsea enjoyed the clutch position of scoring their first-inning runs with two outs because in the bottom of the third they decided to repeat that trend. They started the inning with a strikeout and lineout, but followed with two singles from Tristan Sulser and Clay DeWeesee. Carter Burleson was hit by a pitch during the next at bat to load the bases.

Sulser was able to score on a passed ball during Sam Towery’s at bat to add to the lead. Towery ended up grounding out, however, to end a big threat and leave two runners on base.

Chelsea came to the plate again in the bottom of the third and posted their best inning of the game. Josh Gregg and Jacob Burback started the inning with back-to-back singles, which was followed by back-to-back walks to Kyle Travelstead and William Root to bring in one run and load the bases. Two errors and a fielder’s choice later, and the Hornets had put up four runs in the inning to take a 7-0 lead at the end of three innings.

Montevallo finally put something together in the top of the fourth and threatened Chelsea’s lead. The Bulldogs started the inning with a walk and three straight singles to drive in their first run of the game.

In the fifth at bat of the inning, D Bryant came to the plate and drove a line drive to right field that found its way by Root for a two RBI double to make the score 7-3.

With two runners in scoring position and still no outs in the inning, the Bulldogs were in business. J Hughes scored from third on a passed ball during Tavarus Hall’s at bat. Hall then proceeded to reach base on an error, which also allowed Bryant to score giving Montevallo five runs in the inning without recording a single out.

Things were looking bleak for Chelsea at the time, but over the next two at bats they were able to pick up three outs thanks to a fielder’s choice and a double play to get out of the inning still holding a 7-5 lead.

Without getting a single hit in the bottom of the fourth, the Hornets were able to answer with two more runs thanks to two walks an and error that scored Gregg.

Montevallo threatened again in the top of the fifth by loading the bases with two outs, but a strikeout from Bryant ended the inning leaving three runners on base.

Both teams were quiet over the fifth and sixth inning otherwise and there wasn’t another threat posted until the Bulldogs brought home one run in the seventh, but that’s as close as they could get.

Will Hayes led the way offensively for Chelsea going 1-3 with a double, two RBIs and one run scored. Burback went 2-4 and was the Hornets’ only multi-hit player.

Sulser picked up the win on the mound after going four innings, allowing four hits and five earned runs while striking out three.

Montevallo was led by Nicholas Thompson who went 3-4 batting with a run scored. Daqwan Bryant went 1-2 at the plate with a double, two RBIs and a run scored.

By ALEC ETHEREDGE | Sports Editor Chelsea and Spain Park came into the 2017 softball season with different mindsets. While... read more