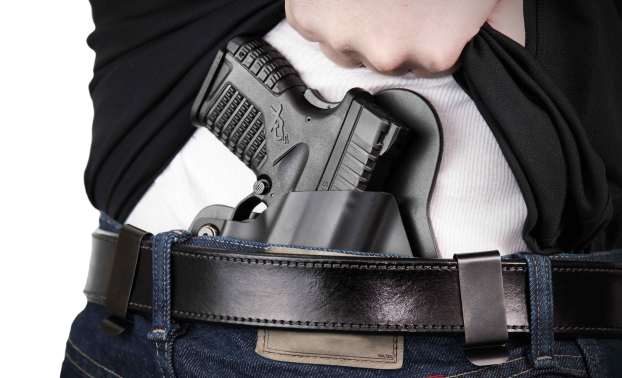 PELHAM – At a town hall meeting at the Pelham Civic Complex on Monday, March 13, Pelham Police Chief Larry Palmer urged city leaders and residents to contact state legislators to speak out against the passing of Senate Bill 24.

If passed by the Alabama Legislature, a permit would no longer be required for a person to conceal carry a handgun and constitutional carry would be the law. Senate Bill 24, which was introduced by Sen. Gerald Allen, R-Tuscaloosa, would allow full concealment of a firearm on one’s person or in a vehicle.

“Alabama should be leading the way on constitutional gun rights,” Allen said in a statement. “More than 10 states across the country already allow their citizens to carry guns without a permit. It’s time we give our citizens the right to bear arms without first seeking the government’s permission. We already allow open carry without a permit, and there is no logical reason for continuing to require a permit for concealed carry.”

The law would also allow handguns to be carried at both peaceful and unpeaceful protests. Alabama currently prohibits handguns at protests. The Senate bill also seeks to remove enhanced punishments for anyone found guilty of committing a violent crime while armed with a pistol.

Palmer said the passage of the bill would require him to sit down and reevaluate the way Pelham Police Department conducts traffic stops.

“It puts the public and police officers at risk,” Palmer said. “I believe in the Second Amendment for law abiding citizens. I’m not trying to take away anybody’s rights. I’m just trying to keep handguns out of the possession of criminals.”

Pistol permits are used by law enforcement to quickly screen an occupant of a vehicle or a person stopped in investigative detention to determine if they are lawfully allowed to possess a handgun.

Although handguns can be obtained illegally, Palmer said every precaution should be taken to try to keep guns out of the hands of those who intend to misuse them.

Those who have been convicted of a violent crime, including domestic violence, are not legally allowed to carry a gun under the current law. Pistol permits are issued after a background check has been conducted on the individual seeking the permit.

Palmer is not alone in speaking out against SB24. Madison County Sheriff Blake Dorning has spoken out against the bill and the Alabaster City Council voted unanimously during a meeting on March 13 to oppose the bill.

“The City Council of the city of Alabaster believes the repeal and amendment of such laws would increase risks to everyday citizens, to police officers, fire personnel and rescue workers carrying out the ordinary duties of their employment by allowing unlicensed and unvetted persons to carry firearms concealed on their persons and in their vehicles,” read the Alabaster City Council resolution.

“We don’t want it to be misconstrued that we are against the Second Amendment. We whole-heartedly support the Second Amendment, but we are concerned about the safety of our law enforcement officers,” Bedsole said. “There are certain laws that are designed to protect law enforcement officers when they encounter someone who is carrying a concealed weapon. Those would be stripped away if this bill passes.”