Person of interest identified in murder of Alabaster resident

BESSEMER- Investigators with the Bessemer Police Department recently identified a person of interest in the murder of 21-year-old Alabaster resident Julian Garcia. 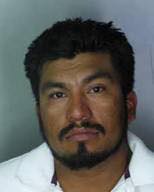 Police are currently searching to bring in 30-year-old Rogelio Vasquez for questioning about Garcia’s murder on Sunday, Jan. 8.

Vasquez was described as a Hispanic male who stands at 5’3 and weighs 160 pounds.

Garcia was found suffering from multiple gunshot wounds near a vehicle involved in an accident while police were responding to an unrelated call at 4 a.m. on Jan. 8. He was transported to UAB West Hospital, where he was later pronounced dead.

Police found multiple shell casings in the parking lot at Bukanas Bar, and are investigating the possibility that Garcia was shot on the bar’s property.

Anyone with information about Garcia’s death or Vasquez’s whereabouts is encouraged to contact the Bessemer Police Department by calling the main line at 425-241, the tip line at 428-3541 or the Criminal Investigation Division at 481-4360.