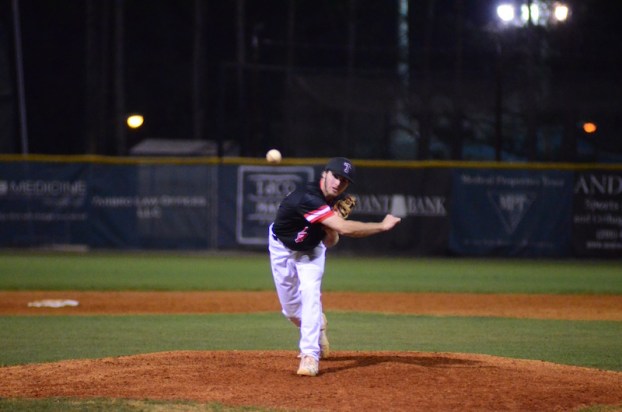 Thompson's JC Parker not only had a strong outing on the mound going six innings, but he also went 2-4 with two RBIs at the plate. (Reporter photo/Alec Etheredge)

PELHAM – An up and down season for the Thompson Warriors baseball team was definitely in the up position on Tuesday, March 14, when they traveled up the road to take on rival Pelham.

The Warriors offense erupted for 15 hits and 15 runs in an easy 15-2 win over the Panthers to move to 8-7 on the season. It wasn’t the typical outing for Pelham ace Mitchell Rottier, who went 4.1 innings on the mound, throwing 79 pitches allowing nine hits and six earned runs while striking out eight.

JC Parker on the other hand came close to picking up his second consecutive complete game as he went six innings allowing just five hits and two runs while striking out seven.

Thompson got to Rottier early in the game and didn’t look back. With two outs and a runner on due to an error, Chris Lewis came to the plate and singled on a ground ball to the shortstop to give the Warriors two baserunners.

Breydon Edmondson was due up next and on the first pitch of the at bat, he drove a line drive to center field that got done for a triple allowing both runners to cross the plate and give Thompson an early 2-0 lead.

Pelham answered in the bottom of the first thanks to a leadoff single from Rottier, who eventually came around to score thanks to a passed ball and groundout moving him to third, which was followed by a sac fly from Kasey Clark. With two outs in the inning, John Long doubled to left field to keep the threat alive, but Will Pierce struck out in the next at bat as Parker limited the first-inning damage to just one run.

Both teams went 1-2-3 in the second inning, but that was short lived as the Warriors’ bats really got going in the top of the third.

Myles Brown, who is a fire-starter for Thompson’s offense, led the inning off with a solo shot deep over the left field wall to extend the Warriors’ lead to 3-1. A couple of batters later, after an error and a strikeout, Lewis doubled to left field on the first pitch he saw to drive in Parker. Thompson was able to add one more run on an RBI single from Caleb Ragland to break the game open and take a 5-1 lead.

Trailing 11-1, Pelham needed something miraculous, but instead was only able to answer with one more run the rest of the way, while the Warriors put up four more in the top of the seventh to win by the final of 15-2.

Ragland led Thompson at the plate going 3-4 with three RBIs and one run scored. Not only did Parker have a nice night on the mound, but he went 2-4 with two RBIs and three runs scored on the offensive side of things. Lewis also had a nice game going 2-3 with one RBI and two runs scored.

Austin Sparks got the save on the mound getting the Panthers in order in the bottom of the seventh.

Rottier was Pelham’s only multi-hit player as he went 2-4 with one run scored. Clark drove in both of the Panthers’ runs after going 1-3 at the plate.