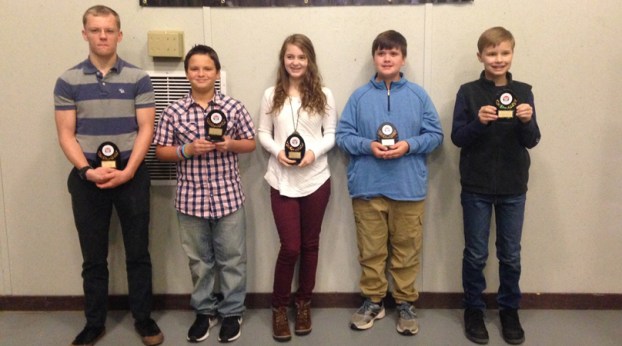 “We asked each school’s administrators to pick one student out of their school that they felt exemplified strength of character,” Shelby County Schools Social Worker Emily Littrell said.

The staff at CHHS said senior Kallahan Morris regularly shows respect for his teachers and classmates.

“He has befriended several students who are new, as he is, and helps them with the transition to a new school. Kallahan personifies the trait of courage,” the report from CHHS staff said.

During his time at CHHS, Kallahan has shown a unique talent in photography. After he graduates, Kallahan plans to enlist in the U.S. Army.

CHMS eighth grader Caroline Parisher was commended for making her school a better place for her fellow students.

“Caroline is energetic and always willing to lend a hand when needed. In watching Caroline interact with other students, she is always respectful of other students’ differences,” her school’s report said.

Caroline consistently makes good grades, is active on her school’s Battle of the Books program and is studying to learn Mandarin. She was also nominated as “most outgoing” in her class, and helps the school’s librarians decorate throughout the year.

FOES fifth grader Wyatt Coolidge was praised for living by the golden rule:

“He is very thoughtful in his comments to others. I can always count on him to do the right thing, even if no one is watching, and no matter what the crowd is doing.”

CPES fifth grader Spencer Bausch received the award due to his dedication to being respectful to everyone around him and acknowledging the efforts of the people in his life:

“I have seen him go out of his way to say thank you to our lunch room staff, our maintenance staff and visiting military representatives. Spencer is easy to teach because he realizes that he does not have to be perfect. He accepts feedback and is always striving to better himself.”

Because of his dedication to doing the right thing, MLES fifth grader Jackson Bradley received the award.

“Although Jackson is a well-liked and popular student, he often works to help students who may feel left out. He always follows the rules, and due to his natural leadership ability, he encourages others to follow suit.”

Parent Beth Bausch said she appreciated that Shelby County Schools and the Chelsea community are always encouraging its students to display good character.

“The teachers and administration are awesome. They teach the kids more than just their ABC’s. They’re teaching them how to be good people,” Bausch said.