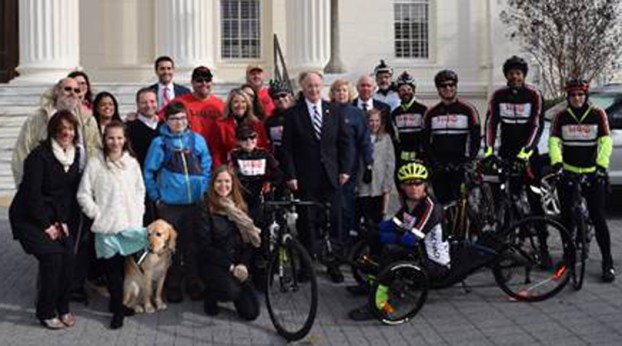 Gabe Griffin, his family and other advocates for the rare disease community spoke to Alabama legislators in order to push for the creation of the Alabama Rare Disease Advisory Council. (Contributed)

Eleven-year-old Gabe Griffin and his family are a few of many Alabama residents who traveled to Montgomery on Tuesday, March 14 to advocate for the state’s rare disease community. The Griffins spoke to legislators, voicing their support of a resolution that would create the Alabama Rare Disease Advisory Council.

“My son is battling against the clock, and we are so excited to see this movement in our state, because we believe collaboration is key,” said Gabe’s father, Scott Griffin. “This is going to allow the rare disease community to have more of a voice in Alabama.”

Griffin established Birmingham-based nonprofit organization Hope for Gabe, after his son was diagnosed with a rare form of Muscular Dystrophy, called Duchenne, at the age of three.

Since 2008, the Griffin family has sought to find a cure for Duchenne through Hope for Gabe. The Griffins currently live in Chelsea, but have extended their efforts to find a cure far beyond their home area.

In support of Hope for Gabe, a group of cyclists rode 83 miles from Cahaba Cycles in Pelham to the Capitol Building in Montgomery.

On Wednesday, March 15, the resolution was passed unanimously through the Alabama House of Representatives. The resolution was originally introduced to the house by the House Health Committee chair April Weaver on Monday, Feb. 27.

“We apparently did such a good job yesterday that they got it passed the next day,” Griffin joked.

Griffin said the Alabama Rare Disease Advisory Council will not just positively affect the rare disease community, but the medical field in Alabama as well.

“This is huge, especially when we’re trying to recruit hospitals, doctors and researchers to come to Alabama,” Griffin said.

According to Griffin, Alabama is one of the first states in the U.S. that has voted to create an advisory council for residents living with rare diseases. He thanked April Weaver for her efforts to get the resolution passed and the rare disease community for their support and participation.

“As the father of a child battling a terminal disease, it is a blessing to live in a state where elected leaders hear our needs and respond to them in such a positive way. Today was a big step in taking Alabama to the forefront of the rare disease community,” Griffin said. “If it weren’t for the rare disease community coming together, we wouldn’t have been nearly as successful.”