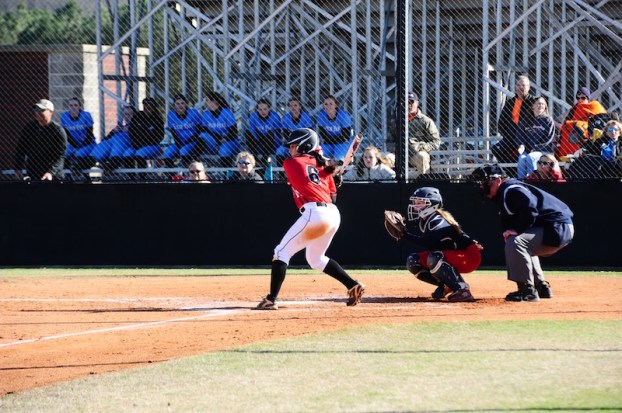 Lauren Haskins had a monster game at the plate, going 3-4 with two home runs and five RBIs. (Reporter photo/Alec Etheredge)

ALABASTER — Lauren Haskins launched two bombs driving in five of Thompson’s nine runs as they broke out for 14 hits in a 9-3 win over area foe Hoover on Wednesday, March 15.

It was the first area game of the season for the Warriors and they made the most of it putting together all nine of their runs in the fifth and sixth inning after trailing 1-0 for the most part of the game.

It wasn’t a quiet night at the plate for either team as the Bucs picked up 13 hits as well, but were only able to bring home three runs after leaving an abysmal 11 runners on base. Thompson’s 14 hits and nine runs were enough, but it could have been an even more convincing win as they left nine base runners on.

Give credit to the Warriors’ Bailey Whitfield who gave up all 13 hits to Hoover after pitching a complete game. She was able to get out of every jam she put herself in like it was nothing only giving up two earned runs in the game.

Hoover struck first in the top of the third inning behind three straight singles with two outs to eventually drive in the game’s first run.

Through the first four innings of play, Thompson struggled to wake their bats up only tallying five base runners and three hits. Finally, by the time the fifth inning rolled around, the Warriors found some magic.

With one out in the inning, Kendall DeRamus started the run with a hard single to left field. Haskins followed with her first home run of the game on the sixth pitch of the at bat, and with one swing of the bat, Thompson had grabbed a 2-1 lead.

One out later, Madison Bubel doubled to right field and Kelsey Edwards walked to put two on and one in scoring position. Kennedy Foote took two pitches during the next at bat before she lined one to center field, which brought in courtesy runner Ayanna Gamble to extend the lead to 3-1 after five.

After giving up that one run in the third inning, Whitfield settled and threw three consecutive scoreless innings at the same time the Warriors’ bats started catching fire.

She faced four batters in the top of the sixth and got out of the inning in 11 pitches to preserve the 3-1 lead, which is all her team needed after the offensive onslaught they had during the bottom half of the inning.

With one out in the inning, Plunkett and DeRamus put together back-to-back singles to put runners on the corner with the dangerous Haskins coming back to the plate.

Haskins struck the second pitch of the at bat right in the sweet spot and drove it over the center field wall for her second home run in as many at bats to break open the game and give Thompson a 6-1 lead.

After a Mikayla Touhey pop out, there were two outs in the inning, but the Warriors weren’t done with the damage. Bubel came to the plate next and doubled to left field, which was followed by a Lawson RBI single to make the score 7-1.

Foote wanted in on the action and drove one to right field. After sprinting around the bases, she was able to leg out a triple that drove in another run. One more single from Heaven Rodgers gave them their sixth and final run of the inning to make the score 9-1 after six.

The Warriors picked up half of their hits in the game during the sixth inning as they had four singles, one double, a home run and a triple to complete the team cycle.

The Bucs threatened in the top of the final inning after stringing together three straight hits, including back-to-back doubles, but they only brought two runs home as Whitfield finished off the complete game.

Haskins was 3-4 in the game with the two home runs and five RBIs. Foote also had an impressive day in the batter’s box going 3-4 with two RBIs and a run scored on two doubles and a triple. Eight different Thompson players picked up a hit as the Warriors moved to 10-4 overall and 1-0 in area play.

By ALEC ETHEREDGE | Sports Editor The first ASWA softball rankings of the 2017 season were released late on Wednesday,... read more