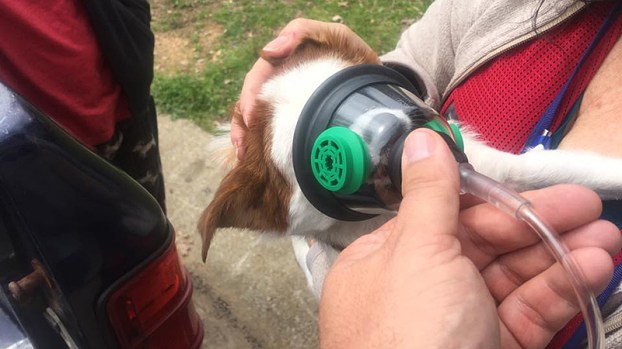 ALABASTER – No injuries were reported to humans or animals after the Alabaster Fire Department rescued several dogs and cats from a house fire on Elm Drive on March 17.

Firefighters responded to the 1200 block of Elm Drive after receiving a call at 12:19 p.m., according to Alabaster Fire Chief Jim Golden.

When firefighters arrived on the scene, they saw heavy smoke coming from the residence, and worked to ensure no people were still inside the structure.

“We made contact with one of the occupants, who told us about the animals in the house,” Golden said. “We continued to work to extinguish the fire while searching for the animals.”

After locating three dogs and two cats in the home and carrying them to safety, firefighters used pet oxygen masks purchased with a grant from a local Girl Scout troop to administer oxygen to the animals.

“We were appreciative of that donation, and we are certainly putting it to good use,” Golden said, noting all animals in the house were accounted for and treated for smoke inhalation at the scene.

Because the house had working smoke detectors, firefighters were notified quickly enough to contain the fire near its point of origin before it caused heavy damage to the home.

“We certainly hate that the family had to experience an emergency like this, but we were thankful nobody was hurt and that we were able to reunite them with their furry loved ones,” Golden said.

By NEAL WAGNER / Managing Editor ALABASTER – The Angel Warriors Foundation will continue its outreach to the local special-needs... read more