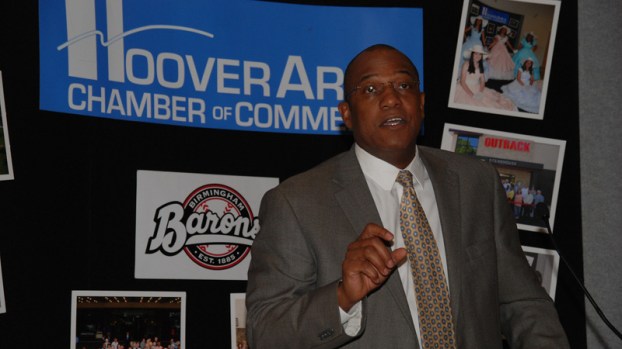 HOOVER – Bobby Humphrey starred on the football field for the University of Alabama and in the National Football League for the Denver Broncos, but these days he is recognized for something else.

Humphrey’s son Marlon, who also excelled for the Crimson Tide, is in the process of possibly being selected in the NFL draft.

“It’s not Bobby Humphrey, it’s Marlon’s dad when I walk a room now,” Humphrey said at the Hoover Area Chamber of Commerce luncheon on Thursday, March 16 at Hyatt Regency Birmingham – The Wynfrey Hotel.

Humphrey talked about growing up dreaming of playing for Alabama and another son who is an entrepreneur before detailing Marlon’s efforts.

First, the defensive back had to decide whether to return to UA for his senior season or forego his final year and enter the draft.

Humphrey added that Alabama prepared his son well for the next stage of his career.

After participating in the NFL Combine, Marlon Humphrey is now interviewing with various teams ahead of the draft on April 27-29.

Marlon Humphrey is expected to be drafted in the first round, which could mean a significant payday, but Bobby Humphrey said does not expect to reap any of the benefits.

“That boy is about as tight as they come, so don’t expect to see me in a new F150,” Humphrey joked.

Humphrey said seeing his children succeed makes him pause to think about his time with them.

“Everybody needs to value their time,” he said. “Once it’s gone, it’s gone.”

By GRAHAM BROOKS / Staff Writer HELENA–Loud cheers and applause could be heard on the backside of Helena Intermediate School... read more