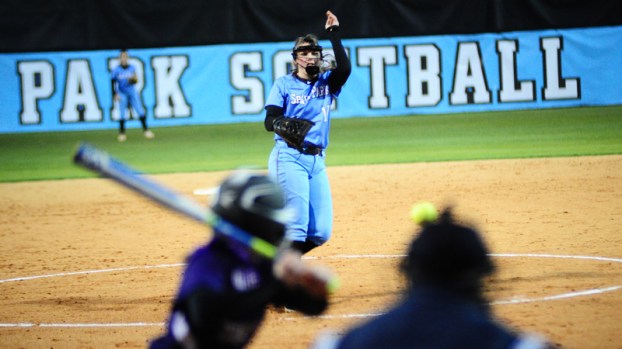 Spain Park’s Kate Campbell records the final out of a 7-0 win over Hueytown on Thursday, March 17. (REPORTER PHOTO/STEPHEN DAWKINS)

HOOVER – Pitchers Annabelle Widra and Kate Campbell combined to shut out visiting Hueytown on Thursday, March 16, and improve Spain Park’s softball team to 17-0 with a 7-0 win.

The SPHS runs, meanwhile, were produced in the first three innings—including four runs in the bottom of the first—by Widra (2-3 with one run scored and one run batted in), Julianna Cross (a triple and two runs scored) and Hope Maddox (two RBI), among others.

Coach C.J. Hawkins said the performance was typical of the consistency the Jaguars have shown during a perfect start to the season.

Spain Park has relied on an experienced group of six seniors to provide leadership.

The team is also chock full of talent ready for the next level.

Maddie Majors and Jenna Olszewski have both committed to play college softball for Auburn University, Mary Katherine Tedder is headed to the University of Texas and many others—including , Julianna Cross, Caroline Parker, Mary Kate Teague and Widra—are either entertaining college offers or will in the years to come.

But Hawkins said this group’s focus is not on college careers but rather the task in front of it.

The Jags fell in the championship round last year and are motivated for a return trip to the state tournament.

“Being in the state championship has put them in the position and the mindset of being back,” Hawkins said. “They’re very motivated.”

Spain Park has everything it needs to bring home the first-place trophy this time around: pitching, defense and a lineup that features power, slappers and speed.

And the roster is deep, with about 15 players ready to do their part at any given time.

“Everybody’s doing a good job of understanding their roles and contributing,” Hawkins said.

There are plenty of potential distractions during a high school softball season, including senior prom, but a concern with this year’s team for Hawkins has been the opposite.

“We’ve actually eased back on practice time because they go so hard so often,” she said.

By ALEC ETHEREDGE | Sports Editor CHELSEA – On a night where the Chelsea softball team gave up an uncharacteristic... read more