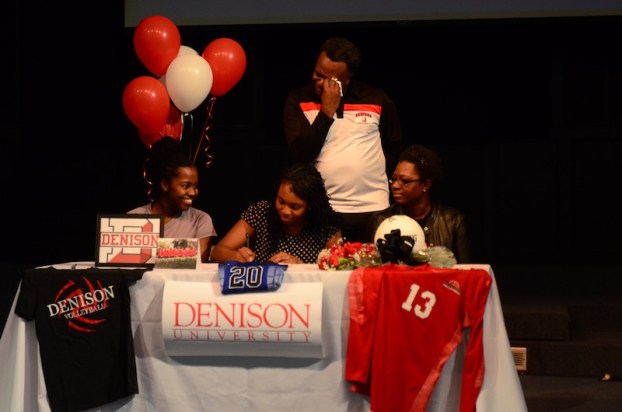 Kathryn Boyd signs her volleyball letter of intent with Denison University while her mother and sister accompany her at the table and her father tries to keep from crying over her shoulder. (Reporter photo/Alec Etheredge)

KINGWOOD – On Friday afternoon of March 17, Kathryn Boyd sat in front of an auditorium full of her fellow Kingwood Christian School students and peers.

With her sister to her right, her mother to her left and her father visibly emotional with tears streaming down his face, Boyd singed her letter of intent to play college volleyball at Denison University in Granville, Ohio.

The senior outside hitter for the Lions’ volleyball squad couldn’t help but break down and cry herself as she addressed everyone in attendance.

Boyd is such a decorated member of Kingwood. Having been at the school since she was in kindergarten, she has truly represented for Lion nation as a student and an athlete.

She was sixth in her class among all seniors, showing she has it not only athletically, but academically as well.

The court, however, is where she truly loves to be and flourishes. As a member of the Kingwood volleyball team she was named to the Shelby County All-County team, was honorable mention on the Birmingham All-Metro team twice, named to the AISA All-State team, won two regional MVP awards, won two regional championships and a run to the AISA Final Four where she finished as a state runner up.

During her span on the varsity team over the past several years, she became accustomed to winning only losing two games in that time period.

All of her accolades are something her father is extremely proud of, which clearly showed when he spoke of his daughter during the signing ceremony.

“I just want to thank god first,” he said breaking down in tears. “I want to thank the staff KCS for nurturing her and preparing her for college and life after college. There are so many things running through my head, but this is honestly such a blessing.”

Boyd was also recently named as Miss KCS by the faculty and staff of the school based on her academic success and the exceptional characteristics she showed in and out of the classroom.

She will now be headed to Denison University for the next step in her accomplished life where she will look to help the Big Red’s volleyball team make improvements.

“We are excited for Kathryn to join the volleyball program this coming fall,” head coach Sarah Graves. “Her consistent and aggressive play caught our eye and her court presence, attention to detail and dedication to training and academic excellence made her stand out.

“However the biggest strength she will bring to this program is her big and positive heart. We are so excited for her to continue her volleyball and academic journey here at Denison.”