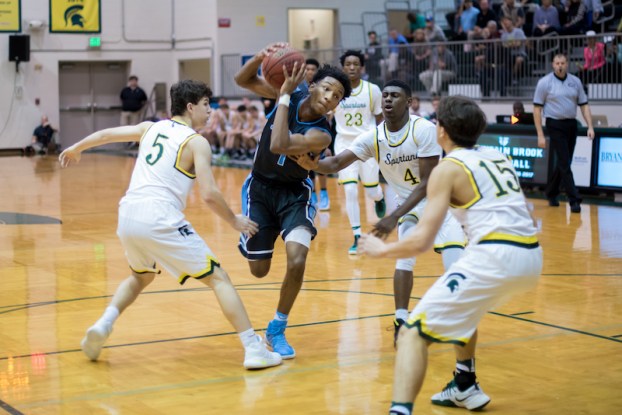 Jamal Johnson was one of five players from Shelby County to make the 2017 All-State basketball team. (File)

One of the strongest senior classes boys basketball has ever seen in this county continued to receive recognition as five will go out with the ultimate postseason award of being named to the Alabama Sports Writers Association All-State team.

Jamal Johnson, Alex Reese and Da’Shaunte Smith all received firs team honors as each averaged more than 20 points per game during their senior campaign. Jon Brown and Stephen Campbell came in just behind, earning a spot on their respective classification’s second team.

Johnson, a standout for Spain Park the past three years, really flourished this year having to take on the majority of the Jaguars’ load with the departure of Austin Wiley to Auburn. Johnson was named to the All-County first team and was also a member of the Alabama All Star team.

He averaged a county-high 24.8 points per game, while also grabbing 7.1 rebounds per game and dishing out 2.7 assists per game. Johnson will be headed to Memphis next year to continue his basketball career.

Pelham’s Reese, also a member of the Alabama All Star team, was named Shelby County’s Player of the Year and was almost a shoe in for a spot on the 6A first team. Reese averaged a double-double with 20-plus points for the second consecutive season and has averaged at least 18 points in the last three years of his high school career posting an overall record of 88-36. He is now headed off to Alabama to join Avery Johnson and company after his time at Pelham comes to an end.

Smith was an easy choice to be a member of the All-State team after one of the more ridiculous stat lines you will see. The senior from Montevallo averaged 20.4 points, 8.1 rebounds, 5.1 assists and 2.2 blocks per game. He came close to picking up a quadruple-double on several different occasions with the Bulldogs this year.

Brown, a 6-foot-4 senior out of Helena, was named to the 6A second team and for good reason. Playing in the toughest 6A area in the state with Pelham and Helena, and going up against one of the tougher non-conference schedules, Brown was able to average 17.8 points, 6.6 rebound, 3.3 assists and 1.4 blocks per game.

The North Alabama signee played what seems like the entire season with a smile on his face just enjoying his final ride in a Huskies uniform.

Vincent’s Stephen Campbell led the Yellow Jackets to yet another 20-plus win season and was basically their sole source of offense. He averaged the second most points in the county behind Johnson with 21.1 per game, while also grabbing 6.2 rebounds and 2.8 assists per game.

By ALEC ETHEREDGE | Sports Editor Spring sports are in full swing, no pun intended, and with it comes the... read more