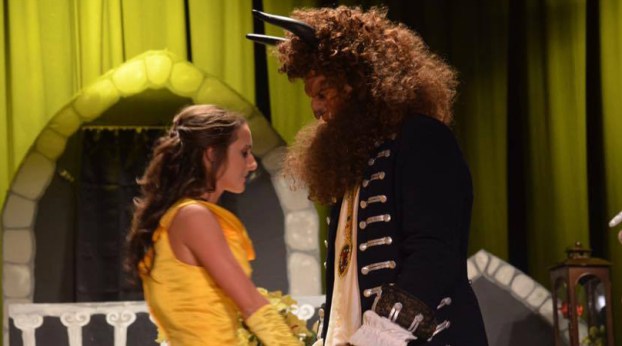 Students Sarah Head and Chip Nash act as Belle and the Beast in the 2017 performance of “Beauty and the Beast” at SCHS. (Contributed)

‘Beauty and the Beast’ takes the stage at SCHS

COLUMBIANA- The Shelby County High School Theater Department premiered its adaptation of Disney’s “Beauty and the Beast” on Thursday, March 16, and performed it throughout the following weekend. According to theater teacher Kathryn Myrick, this is the second year the theater department has performed the musical.

“We’ve been really working toward making it a new show every night,” Myrick said.

While the first time was a great experience in 2011, Myrick said she sought to improve upon it and change things up during the second show.

“Anytime you direct a show more than one time, you don’t want to do the same things you did before,” Myrick said. “My challenge was to take this story and give it a new life. We made it bigger and better.”

Myrick said the cast and crew learned more than just how to act and sing.

“The students learned about commitment to a project that they are accountable for. They’re learning how to work together,” Myrick said. “Learning how to be part of a production is one thing I want them to take away from this.”

Junior Sarah Head, who played a minor character in last year’s musical, said she was honored to have the opportunity to play Belle.

“It was really different. It’s definitely humbling to see what people had to do last year as leads,” Head said. “I had really good directors. It made me realize how much I love to act and sing.”

Through their participation in the musical, Myrick said students had the opportunity to branch out from their comfort zones and meet new people.

“They’re working with people who they might not normally associate with,” Myrick said. “Some kids here will develop friendships that will last a lifetime with people they have never worked with before. One of my favorite things about theater are the bonds that are made that are not expected.”

“We had at least three students who were very sick throughout the process. One of our cast members also fell at a dress rehearsal and got a major concussion,” Myrick said.

Myrick said she is proud of everyone involved with the play, and said she knows how much of a time commitment it was to students.

“I’m very proud of our students and any of our school staff who helped with this,” Myrick said. “The cast has been in rehearsal since Nov. 30, every day, from roughly 3:15 to 5:30 every day, since last year. Sometimes, they would go to three rehearsals a day. They’ve put in long hours on top of everything else that school involves.”

By GRAHAM BROOKS / Staff Writer HELENA–Loud cheers and applause could be heard on the backside of Helena Intermediate School... read more