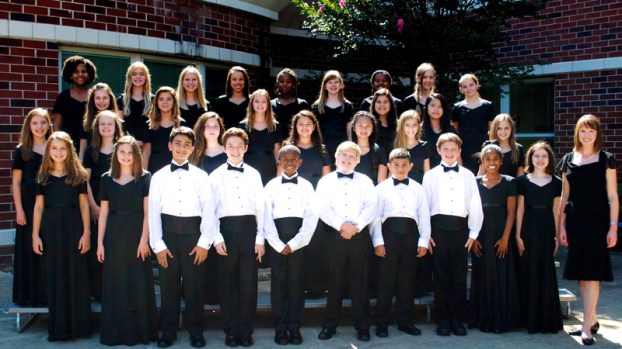 HOOVER – The Berry Middle School sixth grade choir enjoyed a special honor on Jan. 19 when students sang at the annual meeting of the Alabama Music Educators Association in Montgomery.

According to choral director Rachel Smith, the choir began rehearsing in August 2016.

“The Alabama Vocal Association, a subsidiary group of the AMEA, contacted me last spring,” Smith said. “They noted that our choral assessments had been ‘all superior.’ They said we were under consideration for an invitation to the winter conference. I submitted tapes, programs and biographic material, and then I was notified in August that we were accepted.”

The AMEA Professional Development Conference was held Jan. 19-21 at the Renaissance Montgomery Hotel.

Smith, who is in her fourth year at Berry Middle, said she chose the sixth graders, her youngest ensemble of four she directs, for the concert.

“The association includes all levels of educators,” she explained. “There are interest seminars and workshops, and concert sessions interspersed throughout. There aren’t many middle schoolers in concert, so it was an honor for us to be invited.”

Smith said she chose a potpourri of songs for the half-hour event, including an American folk song grouping for the finale.

“Our children were excited to be invited, and they loved the event,” she said. “They knew this was a big deal! They were on their best behavior and performed well. And it was special to remain and hear collegiate performances after we sang.”

Smith said the performance has given her choir momentum for the future.

“Our choir realizes they’re part of the legacy of Hoover Middle, and they’re justifiably proud of what they did,” she said.

The sixth grade choir also sang on March 13 for the Hoover City Schools Board of Education meeting. Smith said she used some of the American folk genre for this event.

More information on the AMEA is available on the website, MyAMEA.org.

‘Beauty and the Beast’ takes the stage at SCHS