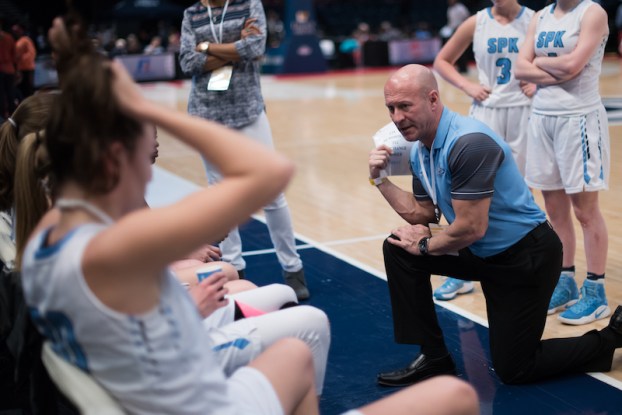 Chase coaches his team during their first ever appearance in the Final Four. (Reporter photo/Keith McCoy)

Trailing by three with 8.3 seconds to play in their Sweet 16 matchup with Gadsden City, Spain Park’s chances of continuing their 2017 postseason run looked bleak.

After junior Claire Holt missed a 3-pointer with four seconds left on the clock, it was all but over. However, eighth year Jags’ head coach Mike Chase kept his team believing all season and that mentality carried over as Holt grabbed her own miss, hit a jumper from the free throw line while drawing a foul and then draining the free throw to tie the game and force overtime, where SPHS went on to win 52-49 to extend their season.

This led to a load of confidence and in two of their next three games they saw similar finishes as they made a run to the 2017 state championship game. In their semifinal matchup against McGill-Toolen, they went into the fourth trailing by 11, but had more heroics to force overtime where they ended up pulling off another miraculous win leading to one last winner take all matchup against rival Hoover.

Yet again, they went into the fourth quarter trailing, but held steady and forced overtime for the third time in four games. Though they fell short by a final of 51-47, the run they made in that four game stretch of the post season was remarkable.

Without a single senior and starting two juniors, two sophomores and a freshman, a lot of that run can be put on the shoulders of Chase, who got his team playing with so much confidence down the stretch. Finishing area play a perfect 6-0 and knocking off the No. 5 and 3 team before falling in overtime of the state championship to the No. 2 team without a senior on the roster was plenty to give Chase the nod as the 2017 Shelby County Coach of the Year.

Several had strong consideration for the honor including Chelsea’s Lori Weber, who in her first year turned Chelsea from a six-win team to a 16-win team as they finished above .500. Montevallo’s Tina Niven is another one that received recognition, but she has almost become so good that their incredible season was expected. Another that received strong consideration was Westminster at Oak Mountain’s Dana Gache, who sent her team to their first postseason appearance and led her team all the way to the Final Four. Oh, and that team was made up almost entirely of freshmen, sophomores and an eighth grader.

The job Chase did, however, in getting his team to make such a miraculous run to the state championship was just too much to overlook.

“After that game with Gadsden City, there was a complete change in mentality, almost like a confidence that I had been trying all year for them to buy into,” Chase said of his team’s incredible run. “Coaches always talk about signature wins and I think winning that game, with the crowd and the atmosphere we were in, I think that kind of put the signature on that group that they finally realized they had the potential to beat anybody in 7A.”

The run becomes even more remarkable when you look at how they finished the season before that matchup with the Titans. After a strong regular season where they finished a perfect 6-0 in their area, the Jaguars struggled mightily over their last five games, going 2-3 in that span. 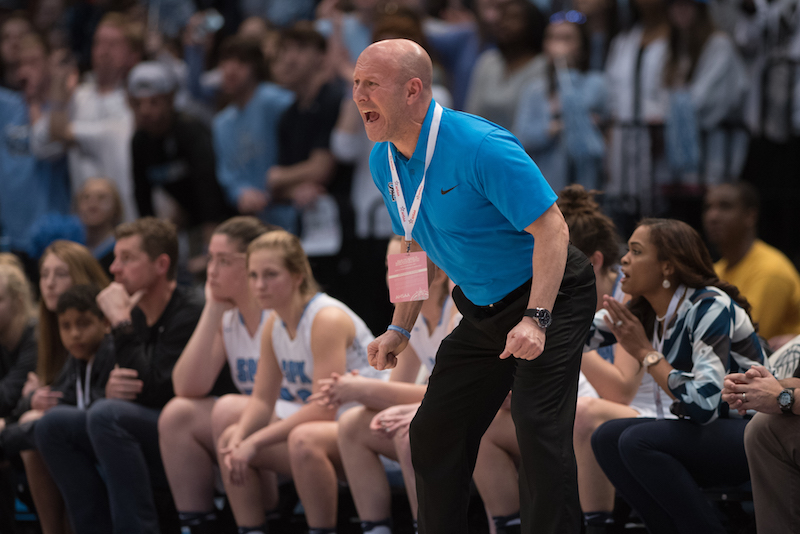 “That loss to Huffman may have been the best thing that ever happened,” Chase said. “I think it really helped them shift their focus knowing we had a rematch with Gadsden City directly after that, a team we played twice in the regular season, including the last week of the season.”

Chase will be the first to tell you, however, that even though his team’s confidence grew late, it was early in the season that they became a team and accepted their roles.

“This year was the first year in a while that not only did I feel like every kid was bought in to what we were trying to do, but every parent as well,” he said. “I thanked them for letting me just be a coach because I was able to do the true form of coaching and teach these girls basketball. I had the right group of kids that like each other and wanted to be great for one another.”

With a team that was completely bought in, it allowed Chase and his team to focus on the season and compete against some of the best competition in the state, which truly prepared them for a postseason run.

“My philosophy has always been that I want to play the best teams and best coaches regardless of classification,” Chase said of a schedule that featured seven top 10 teams, some of which they played twice. “When we got to the playoffs we easily had 15 games against teams that were easily as tough as anybody we would see in the playoffs. I feel like that really prepared our kids.”

In high school basketball, with area play determining your postseason fate, playing those tough teams is a very smart move that keeps a team from seeing something new in the playoffs that they aren’t ready for.

With the team’s confidence growing to end this season, one can only imagine how strong Spain Park’s mindset will be heading into the 2017-18 season. A team that returns all five of its starters and all but one on the entire roster.

“Usually after basketball season the last couple of years, it was really easy for me to step away and not think about the next year,” Chase said. “It was literally within a day this year that I was already looking at stuff and trying to figure out new ideas to put in next season. I know if I’m excited that they are very excited.”

Chase went on to say there are some things his team needs to work on, but with the confidence level, the excitement, the bulk of their talent back and the reigning coach of the year that can get the most out of his team, the sky will be the limit for the Jags as they look to make another magical run.

Michaella Edwards shoots over a double team in a game against Pelham. The sophomore averaged 29 points and 11.1 rebounds... read more