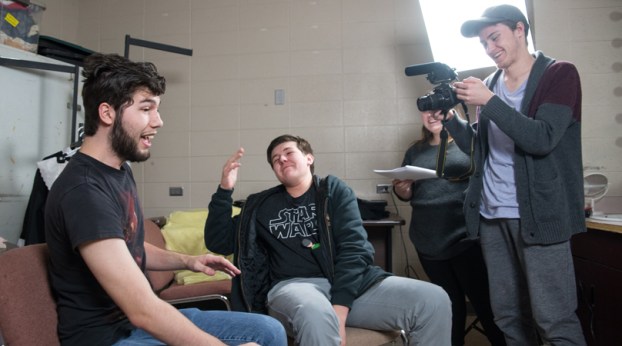 CHHS students work on a scene from the film they produced during a two-day film workshop. (Reporter photo/Keith McCoy)

CHELSEA- About 25 theater and broadcast students at Chelsea High School came together to create their own short film at a workshop from March 14-15. According to CHHS theater teacher Francie Gardner, notable film artist Maggie Ballard presented and offered advice to students as they worked.

“It gives these kids an opportunity to work with film. I teach film to a certain degree in my classes, but if the kids want to pursue it, I want to make sure that they have the opportunity to understand what options are out there and what jobs are really out there,” Gardner said.

According to Gardner, the students had two days to make a short film during the workshop.

“They auditioned and storyboarded it. One of the students took it home and wrote the script after the first night,” Gardner said. “They brought it back this morning, and spent the entire day filming and editing.

At the end of the day, the students viewed a rough cut of the film.

“They all did their roles really well under the guidance of Maggie, who made sure they understood what each role entailed and what they were supposed to do,” Gardner said.

Sophomore Marissa Revel, who wrote the script, said she was inspired to write a ghost story.

“It’s about a boy named Charlie who was a closeted homosexual. He wants to come out, but his boyfriend will not let him. This results in his ultimate demise,” Revel said. “That was the plotline that the crew most wanted to go with, so I tried to make it as fun and interesting as I could.”

Senior Nick Ferlisi said he had prior experience directing a film, but making this film posed a unique challenge to him.

“I love doing film, and directing is typically my strongest position. I love telling a story in different and unique ways,” Ferlisi said. “Generally, we would have a lot more hours and a lot more people.”

Gardner said Ballard’s instruction was especially helpful for several students at the workshop.

“She spoke about experiences in the real world and about the film market throughout the southeast,” Gardner said. “She answered questions about what she’s done and what kinds of jobs are available. At Chelsea, we have had at least two students a year who have gone on to become film majors in college.”

Most recently, Ballard worked as an assistant director on the film “Get Out,” and is the only member of the Directors Guild of America from Alabama. She said she loved teaching the workshop.

“I love kids, and I enjoy sharing my passion with others and seeing them get excited about doing something that they also enjoy, whether it’s in front of or behind the camera,” Ballard said.

Gardner thanked the CHHS administration for counting the students’ participation as a two-day in-school field trip.

“We have such a supportive administration. They are so supportive of the arts, and we are so blessed that they allowed us to do this,” Gardner said.

Eleven-year-old Gabe Griffin and his family are a few of many Alabama residents who traveled to Montgomery on Tuesday, March... read more