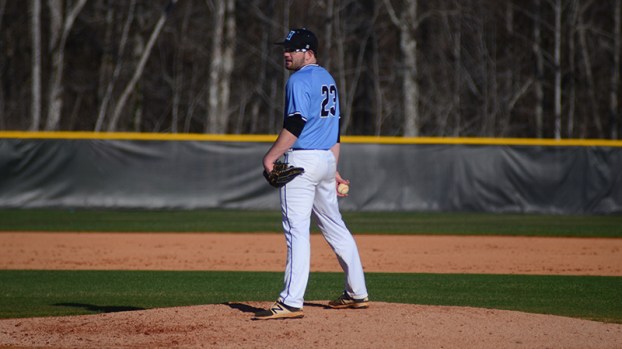 Helena pitcher Brooks Brophy (23) recorded a save in game two of a doubleheader against Vestavia on March 17. Brophy also had two RBIs at the plate in game one. (File)

HELENA–After drubbing Hoover 11-1 on March 16, the Helena Huskies baseball team turned its attention to a Hoover rival, the Vestavia Hills Rebels on March 17 for a doubleheader.

Helena kept the momentum going and defeated Vestavia 12-2 and 4-2 to sweep the doubleheader, continuing a trend of solid defensive play where the Huskies have given up just six runs in its last four games.

The Huskies, who are currently ranked No. 4 in Class 6A after the first ASWA baseball rankings were released the week of March 13, now sit at 12-3 overall and have won seven of their last eight games.

For the second time in two days, Helena won a game by way of a 10-run rule.

On March 16, Helena defeated Hoover 11-1 in five innings and on March 17, the Huskies defeated Vestavia 12-2 in six innings in game one of the doubleheader.

It was Vestavia that got on the scoreboard first, however, as the Rebels scored one run on a wild pitch and added another run in the top of the second inning on an RBI double to jump out to a 2-0 lead.

Helena responded with a seven-run frame in the bottom of the third inning after RBI singles from Riley Davis, Brooks Brophy and Nash Adams. Nick Ragsdale also hit an RBI double and Braylon Moss singled to score Ragsdale to put Helena up 7-2.

Brophy, Ragsdale and Moss all finished with two RBIs a piece in the win.

It was the fifth time this season Helena recorded 10 runs or more in a game.

Helena couldn’t muster much offense in game two of the doubleheader, but solid pitching and timely hitting proved to be the difference in the Huskies’ 4-2 win.

Helena finished with just three hits in the game but all proved to be effective as the Huskies took advantage of the Rebels’ pitching miscues.

In the top of the first inning, Vestavia gave up a one-out walk to put Davis on first. Sam Praytor then came to the plate and roped a double to left field to score Davis to put the Huskies up 1-0.

The next inning, Vestavia walked three straight Helena batters to load the bases with no outs. Busby hit a sacrifice fly to centerfield to score Lawson Peoples to put Helena up 2-0.

Praytor recorded his second RBI of the game after hitting a sacrifice fly to score Trevor Bell to extend the Huskies lead to 3-0.

The Rebels trimmed Helena’s lead to one run after a two-RBI double in the top of the fourth inning with no outs in the inning. Huskies’ pitcher Troy Cordrey then settled in and recorded a pop out, ground out and strikeout to end the inning.

Leading 3-2, Helena’s final run of the game came in the bottom of the sixth inning when Moss hit a two-out RBI single to score Bell.

Vestavia needed at least two runs in the top of the seventh inning to extend the game, but Brophy pitched around a two-out walk to get the save for Helena.

Helena now sits at 12-3 overall on the season and opens area play on March 21 against Pelham.