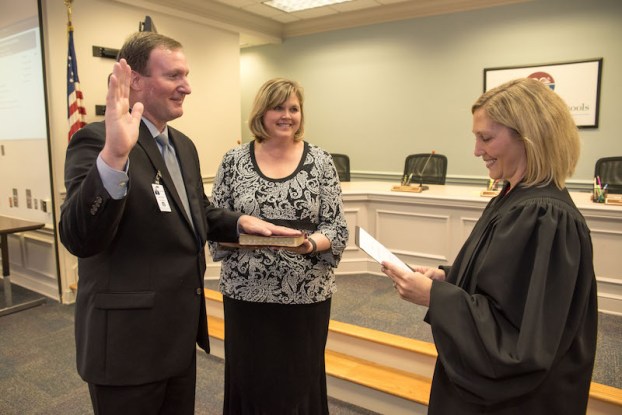 Board of Education approves Bobo to fill vacancy

COLUMBIANA – The Shelby County Board of Education voted to approve David Bobo to fill the vacancy on the five-member elected governing body during its March 16 meeting, and Bobo was sworn in during a specially-called meeting on March 21.

Bobo, who is the Director of Community and Media Relations at Jefferson State Community College and has two children in the Shelby County school system, will step in to fill the unexpired term of Kevin Morris, who announced during the Feb. 16 Board of Education meeting that he had been appointed to serve on the Shelby County Commission. Bobo will fill Morris’ term through its termination in 2018.

“It’s an honor, this is a board that has done some great things for a very long time,” Bobo said during the March 21 meeting. “I have a lot of respect for them. I am thrilled to be a part of that and thrilled to work with them and keep Shelby County schools as excellent as they are.”

Bobo’s appointment to the Board of Education is the latest in a string of departmental dominoes that have fallen in the past few months throughout the county.

Mike Hill, who had served as the state representative from District 41 in the Alabama House of Representatives since 1986, was first named superintendent of the State Banking Department on July 5, 2016. Corley Ellis, the former District 1 representative on the Shelby County Commission, was then sworn in to fill Hill’s vacancy on Oct. 20, 2016. Following Ellis’ move, Gov. Robert Bentley appointed Morris to the vacancy on the County Commission, leaving a vacant seat on the Shelby County Board of Education.

“This has been a phenomenal school system for many years,” Bobo added. “My goals (as a Board member) are to, one, maintain that excellence, and where possible we want to keep getting better.”

Bobo, who also serves as the vice president on the Board of Directors for Family Connection, Inc. as well as various other roles, was chosen from a list of seven nominees to fill Morris’ empty seat. The decision to choose Bobo over the other applicants, in part, was due to the copious connections he has made throughout his professional career.

“He works with a lot of the high schools with his college job (at Jefferson State), recruiting and everything else,” Shelby County Board of Education member Peg Hill said of Bobo. “He’s networked in a lot of areas in our county and he knows a lot of people in our county, and that’s a real plus.”

Bobo said he is anxious to get started in his new role.

“I plan to reach out to all the schools in the system and jump in feet first and see how I can help,” Bobo said. “Me and my family are completely invested into Shelby County.”