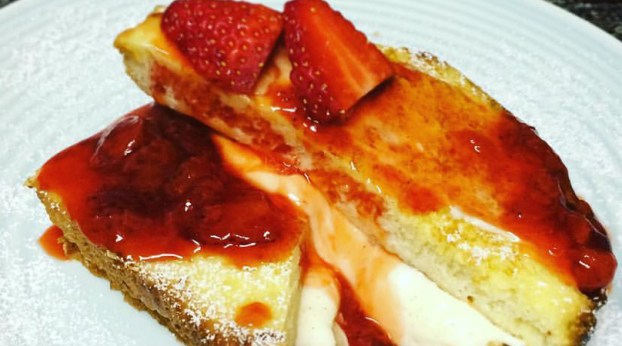 The Copper Train, a fast casual restaurant, is set to open on First Street South in June. Sneak peeks of menu items will be regularly posted on the Copper Train’s Facebook page. (Contributed)

Copper Train to open in Alabaster

ALABASTER- An Alabaster family is currently in the process of opening the Copper Train, a fast casual restaurant that will serve breakfast and lunch and feature a full-service coffee bar.

“I want to provide fantastic food in a relaxing environment, where people can come and enjoy fellowship with one another, find a place to relax and make friends,” co-owner Dakota Stone said. “This will be a great lunch spot.”

Stone, her husband Ryan and her parents, Tim and Tammy Yeager, decided to open the Copper Train in order to pursue her lifelong dream of owning a restaurant.

According to Stone, she and her family decided to open the Copper Train after she graduated from culinary school.

“I graduated from culinary school in 2015. It’s always been my dream to open a restaurant,” Stone said. “I have very supportive parents who are entrepreneurs and are very experienced in business. Being in a house where my parents owned businesses and were fabulous cooks helped me develop the love for food and the dream to have my own restaurant.”

Stone said she specifically picked the restaurant’s building for its location, image and accessibility. The building, which used to house Mitchell Feed and Grain, is located on First Street North.

“The building is very antique looking. That’s the main reason why we love it so much,” Stone said. “It’s right down the road from the hospital and near lots of traffic.”

Tammy Yeager said she came up with the name when she was inspired by something she saw during her commute to work.

“We all had different ideas on what to name it. I was going to my office and there was an old rusted train on the side of the road,” Tammy Yeager said. “It was an antique train, and it was beautiful.”

The Stone and Yeager family plan to open the Copper Train this upcoming June. While they still have a lot of work to do, Stone said opening the restaurant has been a smooth process so far.

“We’ve already met with an architect. We’ve done some demolition work to gut the inside of the building, and we’ve cleaned up the outside a little bit,” Stone said.

Stone said she is also working on developing the menu, and sneak peeks at several items will be posted on the Copper Train’s Facebook page.

Stone said she hopes the Copper Train will add more variety to Alabaster and serve as a more local alternative to some other businesses.

“Most of the restaurants in Alabaster are chain restaurants. There are only a few mom and pop places, but not a whole lot,” Stone said. “We’re adding something to Alabaster that it doesn’t really have. My favorite places are local, because you get a whole different vibe. I’m excited to offer that.”