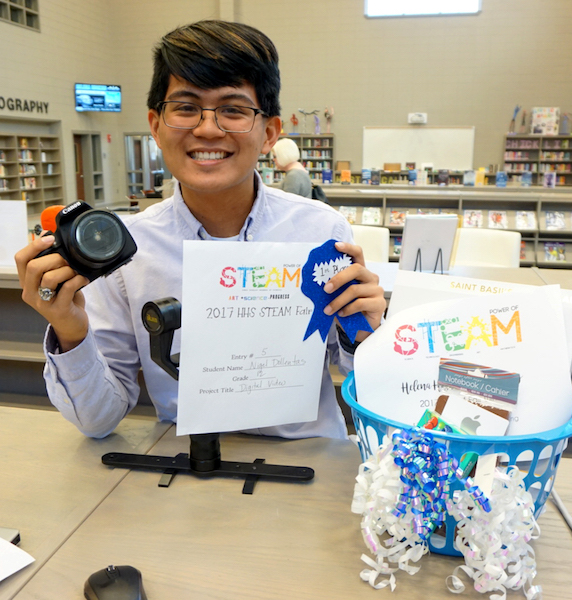 Winner of the first STEAM competition, Nigel Dollentas, who was born in the Philippines, has lived in Helena since the age of 8. He also posts on his YouTube Channel called “One Traveler, One World.” A recent post was filmed at a day trip attended by HHS students at American Village. (Contributed)

Innovation in education recognized Science, Technology, Engineering and Math – known as STEM. Art + Design are poised to transform our economy in the 21st century just as science and technology did in the last century. Therefore, Art + Design have been added to the equation—transforming STEM into STEAM.

STEAM is a movement championed by Rhode Island School of Design (RISD), now widely adopted by institutions, corporations and individuals. Innovation is the way to ensure a prosperous future.

In the HHS competition, first place was awarded to senior Nigel Dollentas for “Hustle,” a Digital Videography; second to Alexa Young for her Theatrical Makeup and Design presentation and third to Christian Nahrgang for her Motorized Animal Flip Book.

Dollentas describes his inspiration and process and where this project has led him. In a column to follow, Young and Nahrgang will be featured.

“‘Hustle’ is a motivational gym video I made to get the viewer hyped up to take that first step into the gym,” Dollentas began. “Whether that is their first time in a year or their first time this week, we all need a little push sometimes.”

A friend, Samantha Sheets, suggested a video about working out.

“It’d be hype!” she told Dollentas.

“I went to the Helena Health Club and met up with several friends for the first three days of shooting,” he continued. “Being familiar with the gym aided immensely in visualizing scenes. Another five days (a total of eight days of filming) were spent sporadically between HHC and CrossFit Furious, as well as Gym Time in Alabaster. Each location provided different aspects, especially raw footage captured at CrossFit Furious.”

With satisfactory footage, it was time to edit to tell a story, he said.

“The audio selected was ‘Still Breathing’ by Dig the Kid, a dramatic song that gradually builds tension and ends with a fantastic climax, perfect for the mood and pace of this video,” Dollentas said.

Around 40 hours total went into the video—including color correction and grading, as well as editing to Dollentas’ perfectionistic standards.

“The video not only won me first place in the HHS STEAM fair but initiated conversations with two gyms as well as an Instagram fitness brand who are interested in making a video as well,” he said.

The video generated enough local buzz and demand to inspire Dollentas to begin his own photography and videography business, Meraki Visual Media. (Facebook.com/MerakiVM/)

By LAURA BROOKHART / Community Columnist Students from HHS attended an awards ceremony at the Capitol in Montgomery in recognition... read more