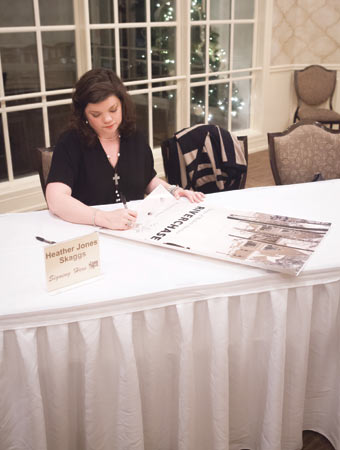 Fortunately, those who read “Images of Modern America: Riverchase” by Bluff Park-based writer Heather Jones Skaggs will have plenty of photos to peruse.

In her third book with Arcadia Publishing and The History Press, “Images of Modern America: Riverchase,” Skaggs presents the history of the Riverchase community through photos, many of which came from the personal archives of people who have been involved in the area’s development since the mid-1970s.

“It was always kind of in the back of my mind that Riverchase would make a good book because it had a good story and it had a passionate community behind it,” Skaggs said. “Since this was my third time doing this, I actually had a good bit of stuff on Riverchase left over from the Hoover book.”

As with her first two books, Skaggs spent months collecting photographs and compiling information for “Images of Modern America: Riverchase” from a variety of sources – longtime residents, community leaders, civic groups and many others who have played roles in forming Riverchase.

The book was published in November 2016.

Riverchase’s history goes back to when the community was called Acton.

According to the book, the Acton family owned much of the land in what was known as the Acton Basin – the general area where Riverchase is located – and the family was involved in mining coal near the Cahaba River.

The Tennessee Coal, Iron & Railroad Company bought the Acton land from the family and sold it to three brothers, Bryan August, F. Arthur and George W. Chace in 1945.

“The Chace family was active in Acton for around 18 years,” reads an excerpt from the book’s introduction. “In 1968, they sold their land to Harbert Construction Company, which marked the beginnings of Riverchase, as the Chace land accounts for a large portion of what is now Riverchase.”

Skaggs said she worked with Bryan Chace to obtain family photos for the book.

“With all of my books, I always want to be very honoring to families,” Skaggs said.

Smith contributed many of the Riverchase Galleria photos in the book, including images of smoke rising from the building after a fire started on the roof of the mall’s office tower in 1985.

“I remember, as a kid, when that happened,” Skaggs said of the fire. “To see what that particular area looked like in that time … looking at that compared to what we are now as a suburb or as a city and how much we’ve grown in that short amount of time is really amazing.”

One of the challenges Skaggs said she encountered while working on the Riverchase book was collecting all color photographs as opposed to black and white images, which filled her previous two books.

She also had to include at least 10 photos from each decade, starting with the 1970s.

Skaggs has been writing for many years. She took journalism in high school, was editor of her school newspaper in college, worked for FOX6 for 11 years and currently writes freelance pieces for Hoover’s Magazine.

Her first book deal, however, didn’t arrive until she started working with Robin Schultz to establish an online community forum for Bluff Park residents, Bluffparkal.org.

“We wanted to have the history of Bluff Park be featured because Bluff Park was having a turnover of young couples and families coming in,” Skaggs said of the website, which contains links to stories she has written about local people and happenings. “History there is so deep, and the extent of it is very wide. We wanted them to be able to know that and have a more modern forum to access it.”

During the process of creating the website, Skaggs said, she was contacted by different publishers regarding a book about Bluff Park, but didn’t commit to anything for a while.

“When Arcadia contacted me, everything lined up,” she said. “The timing lined up.”

Skaggs said she is “still surprised” when someone asks her to sign a copy of her book.

And the moment she first held a copy of the Bluff Park book in her hands is something she won’t forget.

“Actually having it shipped to me and looking at it and holding it in my hand, knowing it was not only a passion project but one to honor a community, it’s hard to explain,” she said. “You see over a year’s worth of work. It’s not about me, it’s about the community I write about.”

Her books are available at Barnes & Noble, Books-A-Million, Costco, Sam’s Club and online via Amazon and Arcadia Publishing.