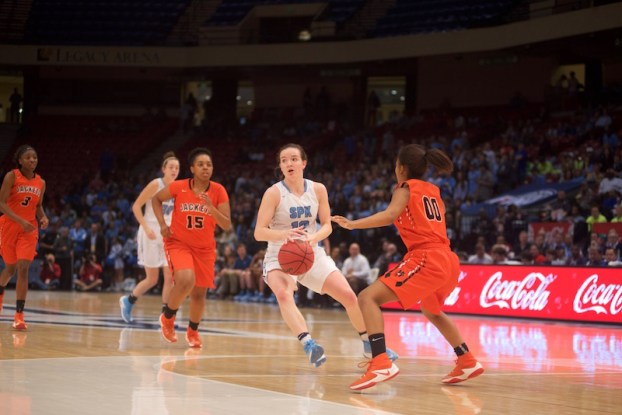 Maddie Majors had another big game for the Jags going 2-3 with a double and a triple during their 2-1 win over Oak Mountain. (Reporter photo/Alec Etheredge)

Jags extend win streak to 22 with area win over Eagles

HOOVER – While the story of Spain Park’s incredible 21 straight wins to start the season, it might be the wrong one to focus on. It’s not just the fact that they’ve started the season as one of the powerhouse softball teams in the country, but how they’ve faced adversity when it has rarely been thrown at them.

Last year the Jags went an average 5-4 in one-run games showing a certain vulnerability in close games, but what makes a team great is how they respond. This season through their first 21 games, they were 6-0 in one-run games, showing they had a burning desire to not fold when facing adversity.

That will continued to prove strong in a crucial area matchup with Oak Mountain at Spain Park on Monday, March 21, as the Jags picked up yet another one-run victory, this time in a low scoring 2-1 game with the Eagles. The win gave the Jags their 22nd consecutive win to start the season and their third area win of the year to put them way ahead of the pack in 7A Area 6 play.

As you would expect in a low scoring game, both team’s starting pitchers found a rhythm and made life hard for opposing batters as they went the distance.

Eighth grader Annabelle Widra got the start in the circle for Spain Park and shined from the beginning as she threw 130 pitches in seven innings and struck out a jaw dropping 11 batters. Widra was able to hold the Eagles scoreless through the first five innings of the game on her way to picking up the win.

Clara Fuller started for Oak Mountain and shined as well. She, like Widra, only gave up six hits in the game, but the one more run allowed was the only blemish in the loss.

Both teams were able to pick up a hit apiece in the first two-and-a-half innings, including a single from the Eagles and a double from Spain Park’s Maddie Majors, but neither was able to bring a run home until the bottom of the third.

After leading off with two straight outs to start the bottom half, the Jags responded with two straight singles. The first of the two came from Julianna Cross on a fly ball to center field. A wild pitch on the first pitch of Mary Katherine Tedder’s at bat immediately sent Cross to second. Tedder then popped a ball just over the second baseman that allowed Cross to come home as the Jaguars took a 1-0 lead.

Things were relatively quiet in the fourth inning, but in the bottom of the fifth, Spain Park struck again thanks to a triple from Maddie Majors, who was driven in one batter later on a cross fielder’s choice to give the Jags a 2-1 lead.

Oak Mountain had their backs against the wall and needed to make a move, which they did in the top of the sixth. The Eagles started the inning with two straight singles from Maddie Katona and O’Neil Roberson, but followed that with two straight outs.

A walk to Sullivan in the next at bat loaded the bases for Abby Jones who singled on a ground ball to second base scoring Katona to cut the lead to 2-1. Widra was able to strikeout the next batter to get out of the jam as Spain Park maintained the lead.

The Jags loaded the bases in the bottom half of the inning, but couldn’t bring home any insurance runs. That didn’t bother Widra though, as she came out and got the last three outs of the game with relative ease in the top of the seventh.

Majors had a nice day at the plate, going 2-3 with a double and a triple, which led to RBIs by Cross and Tedder. Widra also had a 2-3 day in the batter’s box.

Cassady Greenwood led Oak Mountain at the plate, going 2-3 with a double of her own. Jones picked up the Eagles only RBI of the day as she went 1-3.

From Staff Reports Decatur – The Briarwood boys tennis team had one of their most productive efforts in any tournament... read more