The Alabama Association of Prevention Attendance, and Support Services presented the award.

“I was shocked to hear that I had won,” Tanner said. “We have our annual conference on March 10, and I found out during the breakfast portion. It is a very big honor to receive this award.”

In 2016, Tanner was the first recipient of The Rhonda L. Cotten Be the Change Award, which recognizes outstanding school student services in Alabama.

“To be recognized for two big awards in two years is very humbling,” Tanner said. “I am incredibly thankful, and it is nice to be recognized by your peers.”

The Sue B. Adams Leadership Award was established in 2010 to honor Dr. Sue Adams for her retirement.

Adams was a pioneer in the area of prevention and support with the Alabama Department of Education, according to a press release about Tanner’s award.

She has also “successfully created partnerships with Backpack Buddies, Big Brothers/Big Sisters, Chilton-Shelby Mental Health, the University of Alabama, and the University of Montevallo to create wrap-around support systems for students,” according to the release.

“She is always bringing new and innovative ways to help students and their families,” according to the release. “ Further, she works with districts across the state to improve student services.”

Tanner said for her, the ultimate goal is for kids to receive a diploma.

‘When I was first hired, one of my goals was to create a program for kids that were not successful for whatever reason, and have a program where they could get involved, and get on track to graduate,” Tanner said. “Dr. Wayne Vickers and the school board were both very gracious to me in designing the program. We do not want to lose any child, and we really focus on everyone getting that diploma.”

“Kids do not just come to school to learn,” Tanner said. “They also socialize, and interact with teachers. We have to make sure that each student feels like people are investing in them.” 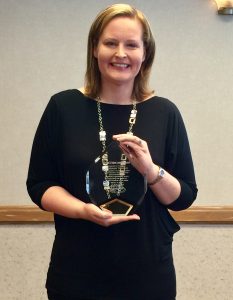