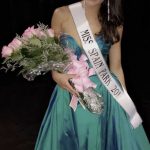 Brennen Cooke was crowned Miss Spain Park High School at the conclusion of a pageant on March 18. (CONTRIBUTED)

“Spain Park is an amazing place, and I feel privileged to have attended for all four of my high school years,” Cooke said. “That being said, I am extremely humbled and honored to have been chosen to represent my school as Miss Spain Park. Plus, the pageant was such a fun experience!”

Cooke, who lives in Greystone, plans to enroll in the nursing program at the University of Alabama next fall.

“We had great weather after a nasty morning,” Heath said. “Everyone enjoyed themselves. The senior boys served as escorts, and they were very handsome. And we raised $1,600 for a worthy cause.”

The pageant highlights a charity each year for support. This year’s charity was the Breast Cancer Research Foundation of Alabama, Heath said.

Junior Emma Land, whose sponsors helped her raise the most money for the foundation, won the Peoples’ Choice Award.

“This will help them for the next steps whether it be college or job interviews,” Halla said.

Halla said the cheerleaders are the group who choose their charity each year, and thus far with the pageant contributions, they’ve raised some $2,500 for breast cancer research.

Pageant winners are listed below:

By CONNIE NOLEN / Community Columnist After every Write Night, Literary Magazine has a Write Night Review. While the event... read more