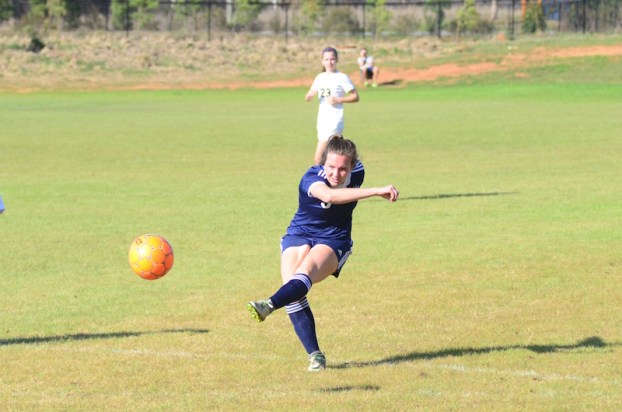 Sarah Adcock fires one of her two goals past the Westminster goalkeeper during Briarwood's 4-1 win over the No. 3 ranked 1A-3A team. (Reporter photo/Alec Etheredge)

NORTH SHELBY – Briarwood made the 1.5-mile trek down Alabama Highway 119 to Westminster at Oak Mountain on Tuesday, March 22, as the two Christian schools faced off in an out of area ranked girls soccer match.

The Knights came into the game with a No. 3 ranking in the very difficult Class 1A-3A standings, while the Lions held a solid No. 5 spot in the 5A rankings. While Briarwood came in as the lower ranked of the two teams, they were able to control the game from start to finish and hand Westminster, who had won six of its first seven games, just its second loss of the season as the Lions picked up a 4-1 win.

A strong defensive effort was present by both sides early in the game, and although the ball tended to be controlled on the Knights’ end of the field, neither team had a great look or threatened to score.

About 20 minutes into the game, the Lions (6-4-2, 1-0) finally made their first move. With the ball finally on their side of the field, Maggie Adcock to an inbound passed over to her twin sister Sarah Adcock. Once Sarah got the ball, she made two really nice moves to fake out the defender and then fired it directly into the back of the net to give Briarwood a 1-0 lead off her sister’s assist.

Two possessions later, Westminster (6-2) tried to put a response together as Tori Deen broke loose up the right side of the field, but pushed the shot just barely wide of the goal. Despite the miss, the Knights had finally threatened and put together their best look of the game.

Briarwood got another great look shortly after as Sarah slipped past the defense with nothing but the ball and the goalie in front of her. Fortunately for Westminster, the goalkeeper was able to beat her to the ball by a split second and wrap it up.

The Knights were able to follow up with the last two good looks of the half as they continued to apply pressure. Eighth grader Hallie Porterfield beat the defense on two different occasions, but popped the ball over the net on the first and was beaten to the ball by the goalie on the second as they continued to come up empty handed. The Lions, fortunate to still be holding a lead, went into the half with up 1-0.

Briarwood came out in the second half with a purpose, controlling the ball from the opening kick. After Deen just missed another opportunity for Westminster, the Lions pushed the ball the other way on a fast break. With several of the Knights’ defenders still back and out of position, Briarwood took advantage as Ellie Sherrod snuck one past the goalie to extend their lead to 2-0.

Westminster had two more great opportunities as Deen broke away again, but a great save prevented yet another goal. Shortly after, Cam Neal got a penalty kick inside the box thanks to a hand ball, but the shot hit off the side post and went wide right.

The Lions took advantage of the Knights’ misfortunes as the Adcock twins put the game to rest over the final 20 minutes. First, Sarah broke loose and easily pushed the ball past the goalie for her second of the night and a 3-0 lead. Maggie followed a couple of minutes later by taking the ball from the other side of midfield all the way to the goal as the defense failed to collapse.

With Briarwood up 4-0, Westminster was able to slide one in off of a rebound about two feet from the goal to get their first and only goal of the game with six minutes left.

Maggie (1) and Sarah (2) Adcock combined for three of the Lions’ goals, while Sherrod added a goal and two assists. Briarwood has now gone 4-1-1 in their last six games.