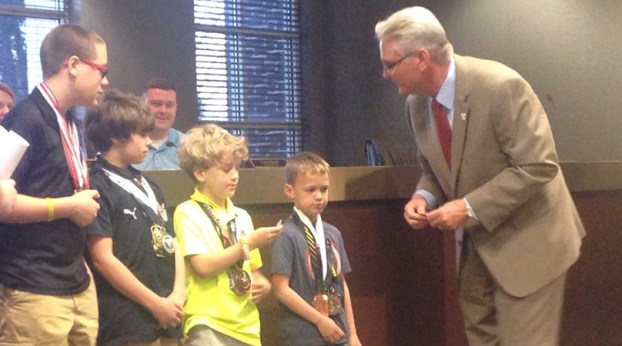 CHELSEA- Several Chelsea residents and locals were recognized during the mayor’s report at a regularly scheduled Chelsea city council meeting on Tuesday, March 21.

“This is because of what this council has allowed us to do,” Mayor Tony Picklesimer said, referring to a previously passed ordinance that increased the fire department’s payscale.

The city also recognized six members of the Chelsea Wrestling Club for placing in their weight and age divisions at the state tournament. The following members received a city of Chelsea pin for representing the city:

After the meeting was adjourned Mayor Tony Picklesimer expressed his sadness at the passing of Chelsea local and Liberty Baptist Church Sunday school teacher Ken Ray on March 21.

“He was a 50-year resident of Chelsea. He will be sorely missed, not only by members of Liberty Baptist, but by so many in Chelsea,” Picklesimer said.

CHELSEA- The city of Chelsea introduced two proposed ordinances concerning the establishment of a municipal court at a regularly scheduled... read more