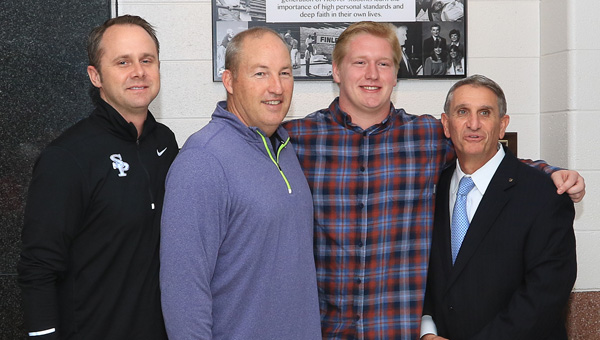 SPHS Assistant Principal Josh Britnell said Henze “represents what we would like for many of our students to represent.”

“First of all, Douglas is a caring and kind individual and has great character,” Britnell said. “He also participates in a variety of extracurricular activities in addition to being a very strong student in the classroom. He is also viewed as a strong leader in our school.”

The award was announced on Feb. 24 in the SPHS Media Center.

Hoover City Schools and the Finley Committee annually recognize three people for outstanding character. Those selected for recommendation include an employee in the district and a graduating senior from both Hoover High School and Spain Park High School.

Winners are announced each year in late winter and honored in the spring at a district-wide banquet, along with grade-level character award winners (grades 3-12) from all Hoover City Schools.

The Finley Awards began in 1996. Longtime educator/coach Robert O. Finley, who served at Hoover’s W.A. Berry High School from 1963-1994, provided the inspiration for the awards program.

Finley was known for his outstanding character and was a role model for thousands of students and student-athletes throughout Hoover.

Students are nominated at Spain Park by a committee consisting of teachers, counselors and administrators.

Henze will receive a plaque and speak to school staff and community upon officially receiving the award.

Henze participated in football, track and field, and the school’s ambassadors program.

He accepted a scholarship to attend Harvard University, where he will also play football.