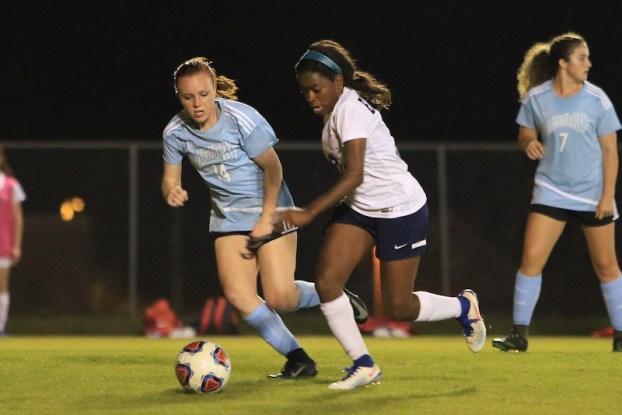 Hailey Whitaker had a hat trick in the first half and put home four total goals as No. 3 Oak Mountain took down No. 4 Spain Park 6-0. (For the Reporter/Dawn Harrison)

NORTH SHELBY – With seven state championships between the two teams over the last 13 years, anytime the Spain Park and Oak Mountain girls soccer teams meet on the pitch, it means a little bit more than most other games. Couple that with both teams being ranked inside the top 4 and an area game on the line, and you have a recipe for the perfect rivalry.

On Tuesday, March 21, that rivalry was renewed as the No. 4 Jags traveled 2.5 miles down Caldwell Mill road to take on the No. 3 Eagles in a Class 7A Area 6 match.

Though it’s an intense game, it doesn’t necessarily mean the game will be close, and thanks to four goals from Oak Mountain’s Hailey Whitaker, who had a hat trick in the first half, that was the case in this one as the Eagles ran away with a 6-0 win to acquire their second area win of the season.

In the first nine minutes of the game, the ball was played around midfield, with neither team getting any great looks.

Spain Park (8-2-1, 1-1) changed that shortly after as they were able to pick up a free kick from about five yards outside of the box 9:30 into the game. Alyssa Young took the kick, which looked really good for a while, but Oak Mountain goalkeeper Alyssa Vess made a fantastic save to keep the game scoreless.

Oak Mountain (10-2-1, 2-0), who hadn’t had a real chance in the game through the first 11 minutes, finally turned up the pressure and changed that fate rather quickly. Julia Pack was the first to wake up as she put the Eagles’ first real chance of the game home with 28:50 left in the first half.

Less than a minute later, captain Hailey Whitaker was inspired and added her first goal of the night off a beautiful crossover and assist from freshman Nicole Payne. Their teamwork had given Oak Mountain a 2-0 lead after scoring two goals in 41 seconds of game time.

Payne decided that wasn’t enough and pulled a couple more beautiful moves that Spain Park’s defenders couldn’t handle. With nobody in her way but the goalkeeper, Payne easily put the ball into the left side of the net with 25:04 remaining in the half. The Eagles had all of a sudden busted the game open in a span of 3:46, and they weren’t even close to done yet.

About seven minutes later, Whitaker picked up her second goal of the night after she bent one perfectly over the goalie’s hands from close to 30 yards out to extend the lead to 4-0.

Just over a minute later, at the 16:23 mark, Whitaker fired in her third goal of the half for a first-half hat trick to put the Eagles up 5-0 as they had scored five unanswered goals in 12 minutes of play to take a commanding halftime lead.

Less than 10 minutes into the second half and Whitaker added her fourth goal of the game to put the Eagles up 6-0, which is all they needed. Whitaker had several more opportunities and could have easily had six or seven goals in the game, but four was plenty with the way their defense played.

The loss snapped a six game winning streak for the Jaguars, while the win was the Eagles’ third in their last four matches.