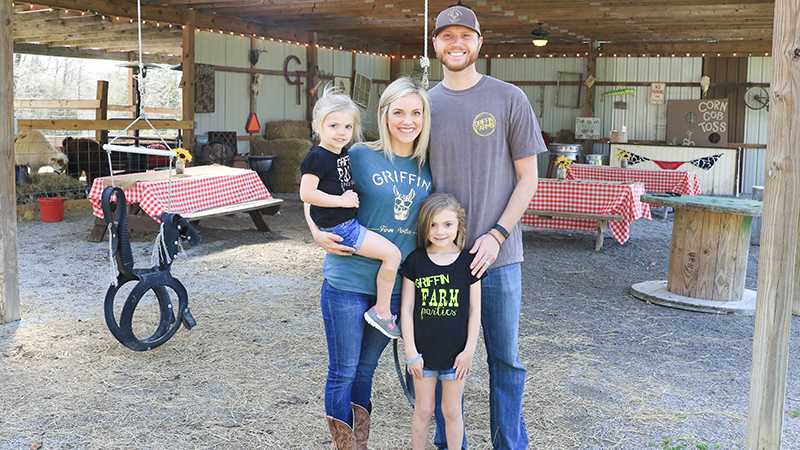 Helena resident Jamie Griffin, right, was on a weekend getaway with his wife Amy when he helped save three children from drowning in the ocean at Ft. Walton Beach, Florida. (File)

FT. WALTON BEACH, FLORIDA–What was supposed to be a relaxing weekend getaway at the beach for husband and wife Jamie and Amy Griffin turned out to be a trip both will not soon forget.

The Griffins are residents of Helena and own a successful business on the family farm where they regularly host parties, weddings, baby showers and more on the property. Jamie is also the manager at the Mid-State Farmers Cooperative in Columbiana and the couple planned a trip to the beach the first week in March before the busy season approached.

“Me and my wife just planned to get away for a few days before spring and before things got busy,” Jamie said. “We went to Panama City Beach at first and our room wasn’t how it was supposed to be so we decided to drive to Ft. Walton to find a place there and spend the day.”

When the couple got to Ft. Walton, they decided to take a walk down the beach even though the weather conditions weren’t ideal.

“The temperature was decent, it was around 70 degrees but the wind was like 30 miles per hour so it was pretty cold,” Jamie said. “Out in the water there were double red flags, no swimming was allowed and the water was cold.”

While walking down the beach, Jamie said he and his wife decided to turn around and walk back because the weather made things miserable.

Once they turned around, Amy looked out in the ocean and despite the red flag warnings, saw three kids swimming offshore. Two boys and one girl between the ages of 8 and 11 were caught in a severe undertow.

“Amy looked out there and said that the boy was in trouble,” Jamie said. “They were about 30 yards off shore and at first I didn’t think they were in trouble. Then I saw a lady take off running down the beach toward them and I knew something was wrong. I threw my phone to Amy and went in where the waves were probably 6-8 feet. The boy was bobbing up and down asking for help and the undertow was really bad. It would take you out and it was about chest deep.”

While helping one boy, Jamie said the boy’s brother began to go under the water also and he ended up pulling both boys to shore and then went back out to help the daughter and mom.

One boy was in bad shape throwing up water when he got onto shore but Jamie believes all three children ended up being OK.

“It was good to be there at the right time,” Jamie, who had lifeguarding experience in college, said. “It was a scary situation. The one boy could hardly scream out for help anymore and we were taught that if someone is actually drowning, they aren’t able to speak.”

Jamie said the weekend getaway didn’t get off on the right foot, but he believes him and his wife were there for a reason.

“From our room to the weather, nothing went right,” Jamie said. “It’s like we were down there for that reason. That’s the only good thing to come out of the trip was saving those kids but me and my wife are people of faith and we believe we were placed there at the right place at the right time.”