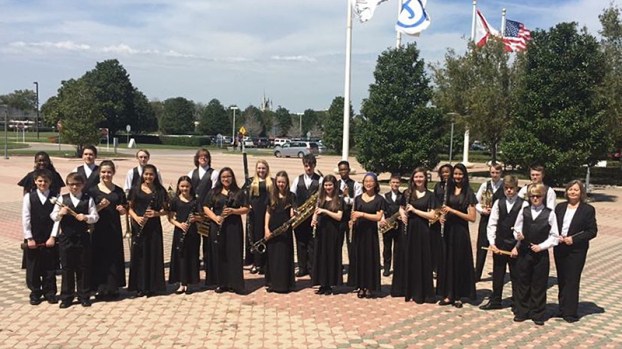 The Kingwood Christian School concert band recently performed at Festival Disney and at the Give Kids the World Village in Florida. (Contributed)

ALABASTER – The Kingwood Christian School band helped spread cheer for children facing terminal illnesses, and earned an excellent rating at a competition during the same trip earlier this month.

“It is a blessing for the Concert Band to be a blessing to others through music,” said KCS Band Director Tyra Cutcher.

The following day, the band performed at Festival Disney in Orlando, Florida, in the ballroom of the Americas at Disney’s Contemporary Resort. The band competed in Class A at the festival, which includes bands for ninth-through-12th-graders at high schools with an enrollment of fewer than 600 students.

Kingwood, which has a sixth-through-12th-grade enrollment of 202, joined the other Class A bands in earning an excellent rating for their performance.

“KCS was only 0.7 away from receiving the ‘Best in Class’ award! The judges were very strict in grading and consistent. Only one concert band out of all the high school concert band classes: A, AA, and AAA received a superior rating,” Cutcher said. “KCS has a young band this year with 15 middle school students and nine high school students. They had a wonderful performance! We are proud of them!”

OHOH Run For Their Lives will be April 15

By GRAHAM BROOKS / Staff Writer HELENA–Avid runners, casual runners or those just looking to have a good time will... read more