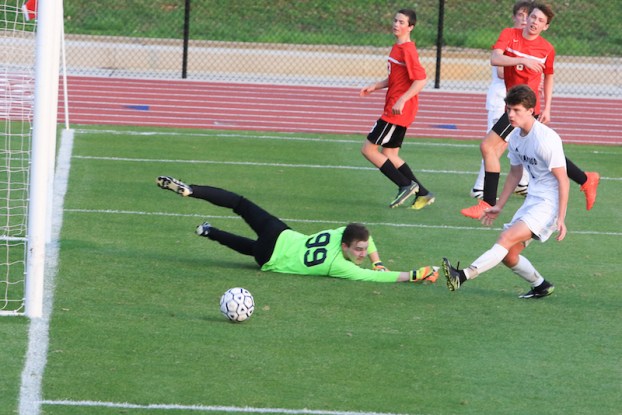 Briarwood played to a 2-2 tie with John Carroll, while several other teams played in tough games on Thursday, March 23. (For the Reporter/Dawn Harrison)

The Eagles and Spartans took to the field in a massive Class 7A Area 6 showdown on Thursday, March 23. In a thrilling game that was tied after double overtime, Mountain Brook won 3-2 after five sets of shootouts. The Spartans were able to take advantage of a block in the first set and carried a one-goal lead throughout the remaining four sets.

Oak Mountain was up 2-1 after a Kennedy Davis penalty kick with just under 6:30 to play. Mountain Brook was able to respond by converting a PK of their own with 5:09 left to play as both teams ended regulation with thrilling goals. Victor Perez and Davis accounted for both of the Eagles’ goals during regulation. The two teams have now split 3-2 matchups in the last week.

John Carroll came into this matchup having gone 0-5-2 over their last seven games, while the No. 6 Lions had only lost once in their last eight games. It was definitely a game Briarwood should’ve handled, but the Cavaliers fought hard to a 2-2 tie.

The Lions now sit at 8-5-2 overall this season, but most importantly they remain a perfect 2-0 in Class 4A-5A Area 8, which features Calera and Woodlawn. After spring break they will have one more game with each of those opponents and should put away the area crown.

After starting the season with a loss to Thompson, Calera (8-6) rattled off three consecutive wins up until a March 3 matchup with Briarwood. Since then they have traded a win for a loss as they haven’t won or lost consecutive games since that date going 5-5 in their last 10 games.

That trend continued into its 20th day as the Eagles followed a 4-1 loss to Chelsea on Tuesday with a rebound 7-0 thumping of area challenger Woodlawn. It marked their second area game of the season and Calera was able to even their record at 1-1 with a big matchup against briarwood looming shortly after spring break.

In the first of four consecutive road games, the No. 1 1A-3A Westminster at Oak Mountain Knights fell 3-0 in a tough matchup against 6A No. 6 Homewood. The loss marked was only the second all season for the Knights, who had gotten off to a 10-1-1 start.

Despite the loss, the Knights have still won seven of their past nine games with one tie and one loss in between and sit atop their classification with a 2-0 record.

In a big 1A-3A ranked matchup between No. 1 Indian Springs and No. 5 Altamont, the visiting Indian Springs took a low scoring 1-0 win. It marked their fourth win in a row as they have taken six of their past eight games with two ties being the only thing keeping them from eight straight wins.

Springs currently sits at 3-0 in Area 3 play and with just three games remaining against area opponents they stand a good chance to come out on to at seasons end.

By ALEC ETHEREDGE | Sports Editor  Oak Mountain 4 Mountain Brook 0 Unlike the boys’ side of things, there was... read more