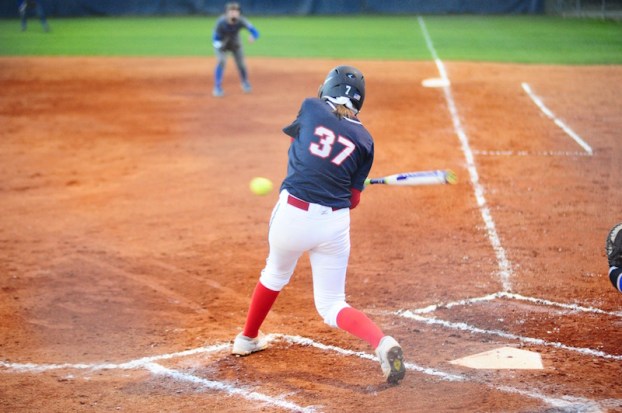 Abby Jones, pictured above, had an incredible game going 2-4 with two RBIs including a game-winning walk-off single. (Reporter photo/Alec Etheredge)

Eagles win with walk off over No. 1 Chelsea

NORTH SHELBY – Abby Jones had a memorable night for the Oak Mountain Eagles’ softball squad, but nothing was more important than her two-out line drive single to right field in the bottom of the seventh inning that drove home O’Neil Roberson for the game’s winning run over the 6A No. 1 Chelsea Hornets on Thursday, March 23.

Jones’ walk off was one of two singles on the night as she went 1-2 at the plate with two RBIs to pace Oak Mountain in a thrilling back-and-forth game.

Coming into the game, the Eagles (12-10, 2-1) had only won three of their last nine matchups, while the Hornets (12-4, 1-0) had just picked up their third loss of the season earlier in the week to Hueytown. Both teams were determined to get back on the winning track, which created for an unbelievable game.

After two-and-a-half solid innings in the circle from Oak Mountain’s Clara Fuller and Chelsea’s Sarah Cespedes, the game was scoreless heading into the bottom of the third.

The Eagles started the inning with a groundout, but were able to follow that up with a single from Abbi Brown and a double from Jenna Galloway before Roberson reached on an error to load the bases. Cespedes was able to get a ground ball to second base, which was immediately fired home to get the forest out and prevent a run from scoring.

With two outs and the bases still loaded, Cespedes was an out away from getting out of the jam, but Oak Mountain had different plans. The Eagles strung together a double and two singles to bring home four runs to bust the scoring open.

In the top of the sixth, that changed drastically, however. With one out in the inning, Brooke Burback sent a fly ball deep over the left field wall for a solo home run to cut the lead to 4-1. Camryn Smith singled on a fly ball to center field during the next at bat and after Cespedes flew out to left field, Kathryn Shoop came to the plate and drilled one over the center field wall for their second home run of the inning. All of a sudden the Hornets had cut the four-run deficit to just one.

After getting through the bottom half of the inning unscathed, Chelsea came back to the plate in the top of the seventh with their last chance to tie or take the lead.

Mallory Bradford gave the Hornets some hope after doubling to left field on the first pitch she saw. After a sac bunt moved her over to third, Allie Miller singled on a line drive to center field bringing Bradford home for the game-tying run. Chelsea was unable to do anymore damage, but they had scored four unanswered runs to tie the game at 4-4.

The Eagles came to the plate after being held scoreless over the previous three innings knowing they had to put something together. Roberson did just that by leading off with a double on a hard ground ball past the left fielder. After two consecutive outs in five pitches it looked like the game was headed for extra innings, before Jones came to the plate.

She found herself in an 0-2 count before she nailed the walk-off line drive to right field to hand Oak Mountain a 5-4 win.

Chelsea was led by Shoops’ home run as she tallied two RBIs and one run scored. No Hornets’ player ended up with more than one hit during the game.