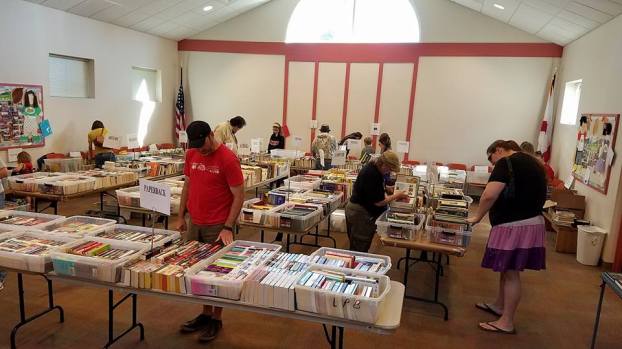 The Friends of the Alabaster Library will hold their annual spring sale April 7-9. The sale (pictured in 2016) benefits the programs and services the library provides throughout the year. (Contributed)

Friends of Alabaster Library gearing up for spring sale

The Friends of the Alabaster Library are gearing up for their annual spring book and bake sale April 7-9.

The sale, which has been held annually since 1983, will be held at the Albert L. Scott Public Library, which is located at 100 Ninth St. N.W., with all of the proceeds from the sale going to benefit the programs and services the Alabaster Library provides throughout the year.

The sale,held twice a year, once in the spring and once in the fall, typically generates about $1,200, Turner said.

During the sale, all paperback books are 50 cents and hardback books will be $1.

Teachers and student teachers looking to replenish or build their class libraries who show a work or school ID can purchase books three for $1, Turner said.

The Friends will also have homemade cookies and brownies available for sale.

All Friends members are allowed to participate in a “sneak peek” sale, which begins April 7 from 5-7 p.m.

Turner said the Friends are always looking for book donations from the public.

“Anyone wishing to donate books can bring them by the library,” Turner said. “We are always in need of donations. The library sifts through the books first to see if there are things they would like, and the rest is taken to the back where volunteers sort them. The only things we do not take are textbooks and magazines.”

Turner said anyone wishing to become a Friend of the library will have the option to fill out a membership form at the book sale.

The group meets four times a year, on the second Monday in January, April, July and October at 6 p.m. in the meeting room at the library.

There are three different membership levels including $10, $25, and a $100 membership which is for a lifetime.

Sign up sheets to volunteer for the sale, or to donate to the bake sale will be available at the library beginning March 24.

For more information about the sale, contact Joan Rickles at 620-1224.