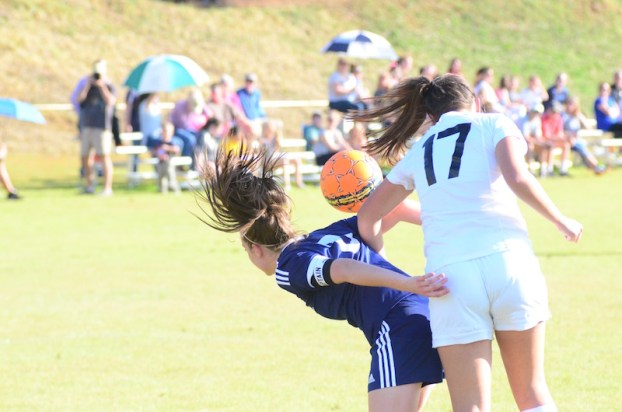 Several girls' soccer teams from across the county competed in their last match before taking a hiatus for spring break. (Reporter photo/Alec Etheredge)

Unlike the boys’ side of things, there was no question who was going to take the girls matchup between No. 3 Oak Mountain and No. 5 Mountain Brook as the Eagles dominated from start to finish with a 4-0 win over their area foe.

Oak Mountain now sits at 11-2-1 overall and 3-0 in area play. With shutout wins over all three area opponents featuring four goals or more in all three, including a 20-0 destruction of Huffman, the Eagles are the clear favorite to win Class 7A Area 6.

After starting the season 7-0-1, the Warriors have hit a rough patch going 3-6-1 over their last 10 games. On March 23, it was going to be difficult to get back to their winning way as they took on the state’s No. 1 girls team in Vestavia.

It was a tight game, but the Rebels offense ended up being too much as they put up four goals in a 4-1 area win. Thompson now has an uphill climb in Area 5 as they sit behind the Rebels (3-0) and Hoover (3-1). With three area games still left, including two with those teams, they still have a chance to finish in the top two, but they must win.

Chelsea made easy work of the Helena Huskies in a decisive 8-0 win over their area rival. The No. 3 Hornets now sit at 7-6-2 overall and 1-0 in area play as they are the clear favorite to come out on top of Class 6A Area 7. The game not only marked a crucial area win, but it also marked a milestone for head coach Jonathan Hammett, who picked up his 150th win.

The Lions dropped just their second game since March 3 in a tough 2-1 loss to 6A No. John Carroll. Briarwood, a great team in their own right, had a great chance to pull the upset and show why they are the No. 5 ranked 5A team, but just couldn’t get over the hump.

The Westminster at Oak Mountain girls’ soccer team has hit a tough stretch playing some of the best teams from across the state over the last couple of weeks. On Thursday, March 23, just like the guys, the Lady Knights fell on the road to Homewood by a final score of 3-0.

It marked the third time in their last four games that they had faced off against a top 10 team after facing Hewitt-Trussville and Briarwood as well. They have yet to play an area game this season, but should be the favorites to come out on top as they kick off area play after spring break.

The Indian Springs girls have been on a tear as of late and continued their strong play against Altamont High School with a 3-0 win for their fourth consecutive victory. They have now won four of five and sit firmly inside the 1A-3A top 10. They now have an overall record of 8-3-1 and will look to continue their strong play into the second leg of the season.