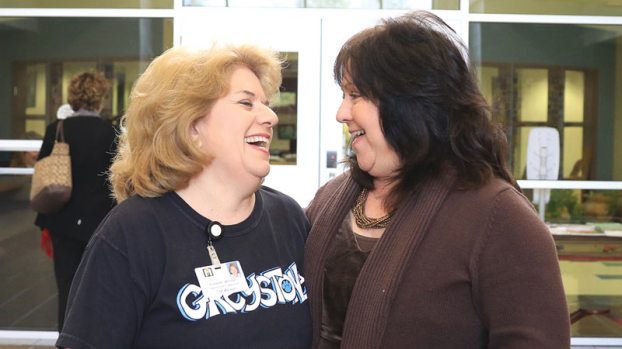 She might not wear a cape or fly through the sky, but Liz Whidden is a hero to students, facility and community members throughout Hoover.

Her passion, hard work and dedication are just a few of the reasons she stands out and why she’s been named a 2017 School Nutrition Hero.

Recognized by the national, non-profit School Nutrition Foundation (SNF), Whidden is one of five school nutrition professionals from across the country to receive this distinction.

She’ll be honored with the others — who live in Arizona, California and two in Michigan — on April 3 in Washington, D.C., during the School Nutrition Association’s 45th Legislative Action Conference.

“While Liz’s main job is ensuring our child nutrition program runs efficiently and effectively, that is not what makes her our hero,” says Stacey Stocks, principal of Greystone Elementary School. “It is the absolute joy that she brings to everyone she encounters. She has so much love to give, and her heart beats for our children and the hurting.”

“I love working in child nutrition because I get to be with a great team every day at a great school, under great leadership with a great faculty,” Whidden says, “and the children are my icing on the cake.”

The child nutrition program provides healthy choices for breakfast, lunch and daily snacks. Whidden and her staff periodically highlight a healthy food students might not be as familiar with, like kale, and offer them samples.

“Liz not only prepares nutritious food for our children, teachers and guests, but she teaches the children about healthy choices,” Stocks says. “She encourages children to try new things and wants them to always find happiness when they come to the cafeteria. She will bend over backward to make a child smile by finding just the right granola bar or apple.”

To keep the students excited about eating healthy, Whidden and her team have implemented several fun and unique activities. For example, they might come out to a song and dance to greet the children. Or, they may take students on a tour of the kitchen as part of “Elves in the Kitchen” with the Naughty Elf Broccoli Bruce.

“They will also dress up for special occasions like World Milk Day or Read Across America Day,” Stocks says.

Whidden and her team take to the web to engage the students, as well. They posted a music video about Crispitos when the dish was added back to the menu, and it had nearly 10,000 hits on Facebook, she says. They also created a video promoting their Thanksgiving dinner.

“Our future are these students, so we want them leading a healthy lifestyle, beginning with a healthy breakfast and lunch with healthy snacks,” says Whidden, who hasn’t missed a day of work in three years.

As for being named a School Nutrition Hero, Whidden says it’s still sinking in.

“I feel there are so many people that are probably more qualified than me, but I receive it as an honor,” she says. “This is not only for me, but also for the great school system that I represent. Being a part of the Hoover School System has taught me so much about striving for excellence.”

Melinda Bonner, director of child nutrition in the Hoover City School district, was the one who recommended Whidden for the School Nutrition Hero honor. Bonner says she nominated Whidden “because of her love for her job. That’s shown not only in her work ethic, but also in the heart she has for the children.”

Being recognized on a national level speaks volumes about Whidden and the Hoover City School system, as well.

“It just shows we have great employees,” Bonner says. “She works her job with excellence and passion.”

But her love for helping people isn’t just confined to the lunchroom. Whidden has also owned Massey Mercantile in East Birmingham since 2001 and carries products like livestock food, garden seed, dog supplies and fertilizers. She says she enjoys sharing what she has with the school and community.

“My biggest joy is supplying seeds for our school gardens,” says Whidden, who also cooks what the students grow for them. “A school garden is really an outside classroom. A child can learn so much from planting a seed, to watering and watching until harvest time.”

She also shares her seeds with others like a doctor who goes on medical mission trips to Kenya. “Helping a country feed its people, there is nothing like it,” she says. “I am happiest when I am giving and sowing into people’s lives.”

Whidden also uses the business to help the homeless. “We have an abundant amount of backpacks that are supplied with candy, a blanket, flashlight, tooth brush, tooth paste, hand sanitizer, comb, shampoo, deodorant and other essentials,” she says. “You don’t have to come into the store: If we see you walk by, we will go to you.”

There’s also a prayer request sheet in the store, and she says it gets filled up weekly. “I love to pray with people, and sometimes they will come by just for prayer,” Whidden says.

Greystone’s students and parents also help support her efforts by bringing Whidden food and other goods for the backups, Bonner adds.

“At Greystone, we know how wonderful Liz is and how deserving she is of this honor,” Stocks says. “It thrills me that the School Nutrition Foundation also recognizes the extraordinary character of one of our own.

“Our world needs more people like Liz,” Stocks continues. “She exemplifies the selfless attitude of a true hero.”