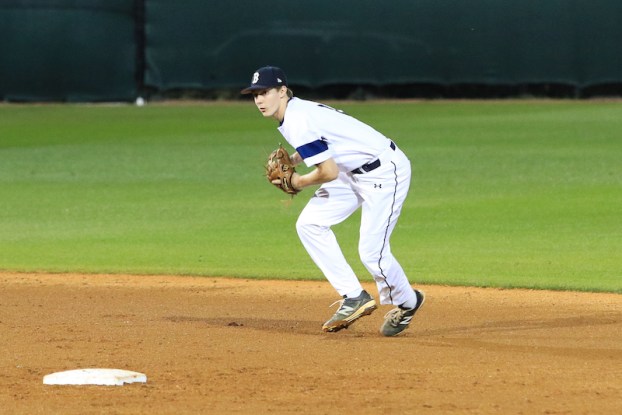 After falling 6-0 to the Eagles on Tuesday, March 21, Briarwood responded with a 2-1 win on Thursday, March 23, in a rematch. (For the Reporter/Dawn Harrison)

No. 1 BCS rallies past Oak Mountain 2-1 in rematch

NORTH SHELBY – In the second pitching battle of the week between two of the state’s top teams, Briarwood Christian edged Oak Mountain, 2-1, on the road on Thursday, March 23.

The Lions, ranked No. 1 in Class 5A, stranded their first five runners through five innings, as Eagles’ starter Caleb Floyd extended Oak Mountain’s shutout streak to 12 innings after blanking Briarwood 6-0 on March 21. However, Briarwood starter Sam Strickland was also doing a number on the 10th-ranked team in 7A. He struck out seven in the complete-game win.

“Those are the games when you’re playing really good teams you don’t win, but our kids fought back and found a way to win,” Briarwood coach Steve Renfroe said. “Sam was dominate. He put us on his back today.”

Oak Mountain took a 1-0 lead in the fourth on a leadoff single by Ethan Holsombeck and one-out RBI double by Mason Williamson, but Briarwood rallied in the sixth.

“We knew that runs would be at a premium today,” Oak Mountain coach Derek Irons said. “They had a really good pitcher up there, and we really like Caleb too and felt we’d keep them low. Caleb struggled in the first couple of innings but settled in and competed well, but they got a couple of hits when they needed to.”

Will Baumbach and Kolby Kwarcinski led off the sixth inning with back-to-back singles. Graham Core followed with a one-out walk after falling behind in the count 0-2. The walk chased Floyd, despite his eight strikeouts through 5 1/3 innings of work.

Michael Hiers drove in pinch runner Will Shepherd with a sac fly to right off relief pitcher Cade Sanders. Carson Eddy followed with a single to center to score pinch-runner Gabe Russell for the 2-1 lead.

“Gabe’s walk was huge, and Carson Eddy has been a real clutch player for three years,” Renfroe said.

Strickland retired the Eagles in order in the bottom of the sixth. Baumbach delivered a two-out double in the top of the seventh, but Sanders was able to get a ground ball back to the mound to keep the Lions from adding another run. Baumbach and Strickland each had two hits to lead the Lions’ offense, while Joseph Hartsfield led Oak Mountain with a 2-for-2 day in the nine hole.

Floyd led off the seventh with a single and moved to second on a two-out passed ball, but Lions’ first baseman Logan Whittlesey ended the game with a diving line-drive catch to rob Logan Sheaffer of a potential game-tying hit.

“We played good but not great,” Irons said. “A lot of times when you lose, especially a 2-1 game, you look at missed opportunities. We gave them seven freebies on defense. That’s too many, especially with the offense they have. Eventually it’s going to bite you.”

“We really wanted to see their arms. It’s great for us because we’re going to see some great arms out of Moody (April 4 and 7),” Renfroe said. “We couldn’t have a better recipe for this week.”

Briarwood (15-2) will return home Monday, March 27, to host Tuscaloosa County at 6:30 p.m. and will travel to Mountain Brook later next week for a 10 a.m. game Thursday, March 30 against the Spartans and will meet Central Tuscaloosa and Priceville at MBHS at 12:30 p.m. and 3 p.m. on Friday, March 31.

Oak Mountain (13-7) will wrap up its pre-area schedule with a doubleheader at Pinson Valley on March 24 and a Spring Break tournament in Gulf Shores next week, taking on Sweet Water, Oneonta and Clarksville (Tenn.) on March 28 and 29.