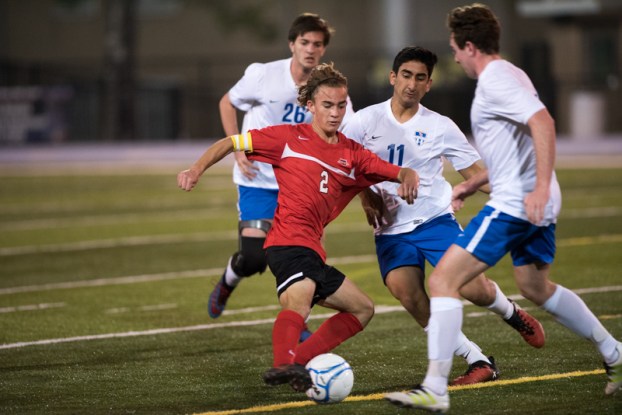 Thompson senior Gavin Owens tries to make a move to get by the stingy Vestavia defense. (Reporter photo/Keith McCoy)

VESTAVIA – It was a windy spring night at Buddy Anderson Field as the No. 9 Thompson Warriors traveled to take Vestavia Hills on Thursday, March 23, in an important area matchup of ranked teams.

Due to two first-half goals and a strong defensive presence, the No. 4 ranked Rebels were able to hang on in the second half for a 2-0 shutout of the Warriors.

One of the big difference makers was not only the resilient defensive effort of Vestavia, but their offensive aggressiveness that led them to victory. That aggressiveness, especially early in the game, led to six corner kicks to Thompson’s one throughout the game.

Although the Rebels tended to control the ball the majority of the first half, it was the Warriors who got the first chance of the game. Within the first 40 seconds they were able to sneak by the defense and get what might have been there best look of the game right in front of the goal, but the Rebels’ goalkeeper made a fantastic save to prevent Thompson from jumping ahead early.

Seven minutes into the game, the Warriors got their second good look of the game as they controlled the ball early, but yet again failed to convert. This is when the Rebels went on a tear and really started dominating possession.

Their first chance came 9:30 into the game as they were awarded a free kick from 15 yards out, but missed a great opportunity as the ball sailed over the goal.

Just over a minute later with 29:20 left in the first half, Vestavia made up for their strayed first attempt by heading one into the back of the net from just in front of the goal for a 1-0 lead.

The Rebels got another great opportunity two minutes later, but Thompson’s goalkeeper, Aaron Suarez, made a fantastic save and the Rebels’ rebound chance went wide of the open net.

However, just like Vestavia’s response to their first missed opportunity of the night, they responded with another goal shortly after. On their second corner of the night, the Rebels took advantage and headed another one home at the 25:40 mark of the half to take a 2-0 lead.

Vestavia controlled the ball the remainder of the first half and got several more good looks, including three more corner kicks, but thanks to some great saves by Saurez, the Warriors were able to hold the deficit at two. Going into the second half, they desperately needed to be more aggressive on offense.

The Rebels came out and continued their aggressive play in the second half as they earned their first corner of the second half 1:47 in. They failed to convert and missed another great opportunity shortly after as Suarez made another fantastic save and the rebound shot sailed high and wide of the open net.

Despite giving up two goals in the first half, Suarez had an incredible game making some incredible saves throughout with the ball coming at him the entire night.

Finally, Thompson started to get aggressive at got their first corner kick 9:25 into the second half. They weren’t able to take advantage, but gained some confidence. The Warriors controlled the ball the remainder of the game, but missed several extremely close opportunities over the remaining 30 minutes of the game as they went on to fall 2-0.

Vestavia moved to 9-4-1 overall and 3-0 in a tough area featuring three ranked teams, while the Warriors fell to 7-5-2 overall and 1-2 in the area as they sit in third place behind the Rebels and Hoover.