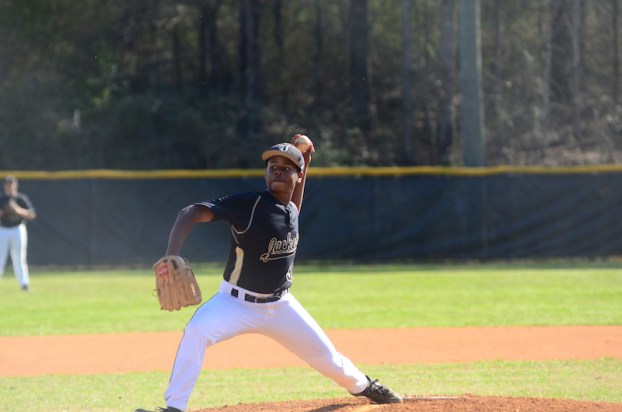 WOODLAND – Vincent is off to a strong start on the 2017 baseball season, and that start got even stronger on Tuesday, March 21, as they picked up their eighth win of the season in a 10-0 thumping of area foe Woodland.

It wasn’t just the 10-run outburst or the shutout that was the storyline of the impressive performance, but instead it was Ethan Davis who stole the spotlight on the mound by throwing a perfect game.

“It’s a big deal, I told the kids after that I had never coached a perfect game before,” head coach William Halla said. “These kids really do work hard and to see them succeed like that is such a big deal.”

Even more impressively he only threw 47 pitches to complete the perfect game with 39 of them being strikes, which meant he threw strikes on 83 percent of his pitches and only faced a three-ball count once in the fourth inning.

“The defense was key, but his command with throwing 39 strikes in 47 pitches is what got it done for him,” Halla said.

Though his command was stellar, there was one defensive play made by Saylor Carroll. On a soft line drive late in the game, he was able to make a pretty spectacular grab to keep the perfect game alive.

Offensively four guys had multi-hit games with several guys leading the way both on the bases and at the plate. Casey Singleton led the way going 2-3 with two RBIs in the game.

“Once we jump out we sometimes just like to sit on leads, but everything went well in this game, we continued to look strong offensively and with the pitching we have that’s all we need to win consistently,” Halla said of his team’s balanced performance.

Carroll and Cole Fincher also had strong performances as they both went 2-3 in the batter’s box. Carroll knocked two doubles as well as two stolen bases, while Fincher picked up three stolen bases and scored three runs. Those five combined stolen bases were key and something Vincent likes to do and needs to do to win ball games.

“It’s a big deal for us because we get in situations in certain counts where we like to run and for them to come up and make those chances count is important for our team,” Halla said.

While the offense went to work, Davis took advantage of the cushion to grow his confidence, something that is evident any time he steps on the mound.

“He’s given up five hits his last three starts, which is pretty good, and he threw a no hitter last year, so I don’t want to say it was a matter of time, but it was basically just Ethan being Ethan,” Halla said.

While, many might think a perfect game is solely an individual accomplishment, it meant a lot more to the entire Yellow Jackets’ team than you might think.

“I think the biggest joy we got out of this is that Ethan might have been last one to know,” Halla said. “We had several kids know, but not him which really plays into the team aspect that you try to teach because they were all just really happy for him.”

The Yellow Jackets moved to 8-5 on the season with the win and picked up their third area win as they sit in the driver’s seat of Class 2A Area 10 with a 3-0 record.

By ALEC ETHEREDGE | Sports Editor When the first ASWA baseball rankings of the 2017 baseball season were released last... read more