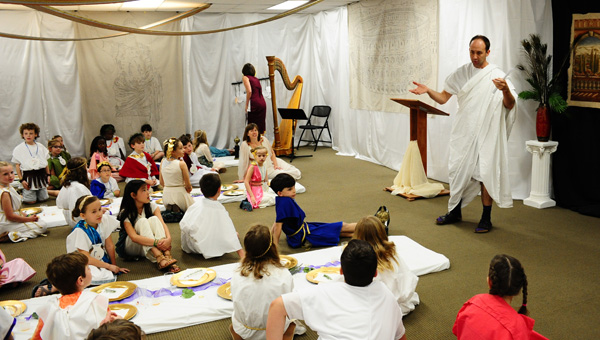 NORTH SHELBY – Westminster School at Oak Mountain third grade students immersed themselves in ancient Roman culture for the culmination of their study of the subject.

Roman Mega Day was held March 17 at the school, with students dressing as Romans, enjoying a “feast” and much more.

There are 44 third graders in three classes at the school who began studying ancient Rome in January and recently finished the unit on life in ancient Rome, including what Roman families were like and how they dressed, Reed said.

For Roman Mega Day, students wrote with a stylus and wax tablets made of wax paper on cardboard, and performed math problems using Roman numerals.

Students used their creativity to create standards using Scripture verses important to them, and they decorated “bullas,” necklaces that held charms for young children.

Then, the classes gathered to watch clips from the film Ben Hur, including the famous chariot race.

Decorum was discussed because the next activity was attending a feast at the home of “Senator Ritch.”

A room at the school was transformed to the scene of a Roman feast, and Upper School humanities teacher Charlie Ritch played the part of a senator hosting the students.

The guests were served a variety of Roman foods by “slaves” (10-15 parent volunteers).

During the feast, students were entertained by harpist Clayton Raines and skits performed by slaves from the Upper School Latin Club.

“Some of them were brave enough to eat it,” Reed said.

Chariot races were re-enacted with students sitting in large boxes while being pulled by a classmate. Teachers demonstrated the technique.