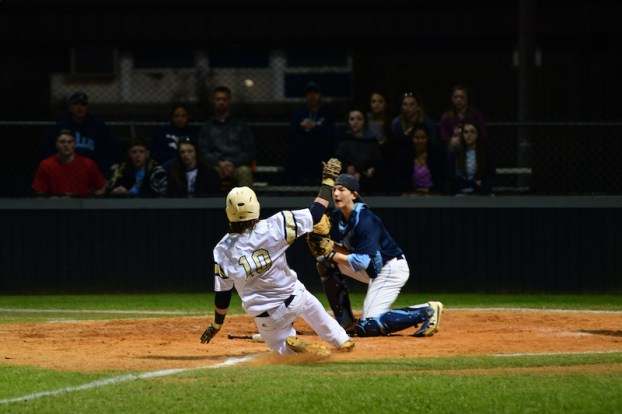 Calera was able to sweep three games with Jemison in a two-day span to move to 3-0 in area play. (Reporter photo/Steven Calhoun)

Fourth-ranked Calera took control of Class 5A, Area 7 play March 23-24 with a three-game sweep of Jemison, pounding out 31 runs on 39 hits. The sweep sets the Eagles up for only needing one win over Marbury on April 13 or 14 to win the area.

“We know when we get to that time it’s going to be a dog fight and we’re looking forward to it,” said Calera head coach Trey Simpson.

Tyler O’Clair used a five-RBI day to lead the Eagles in a 16-5 win March 23 at Jemison, and then shutout the Panthers on the mound in the first game of a home doubleheader March 24, 5-0. Calera took game three of the series, 10-6.

“It was a good time to get hot … The kids really executed what we’ve been trying to do,” Simpson said. “You could see they approached it differently. We had a lot more energy, which we were looking for, and at no point did it feel like we were on the defense.”

In game one of the series, O’Clair sparked the Calera offense with a one-out RBI single in the first for a 1-0 lead. The Eagles added a run in the second, but Jemison evened the score in the bottom of the inning. Calera plated two, three and four runs, respectively, in the next three innings to take an 11-2. Jemison pushed across a pair of runs in the sixth, but Calera added five more in the top of the seventh to keep the game out of reach. Jemison tacked on another in the bottom of the seventh. Jacob Smith collected the win on the mound, striking out eight, but allowing eight hits, three walks and a run through five innings.

O’Clair went the distance in game two, striking out nine in a three-hit shutout, 5-0. Calera leadoff hitter Will Glasscock walked to start the game and later scored on a passed ball. Ellison singled in a run in both the first and third innings. Glascock scored again in the fourth on an RBI single by Austin McKinney, who was driven in by Christian Hall. Glascock scored eight times in the three-game series.

“(Glascock) is a spark that really gets our lineup going. When he’s getting on base good things are happen,” Simpson said. “He’s very aggressive on the bases with a very good understanding of getting jumps and leads. He can turn a walk into a double in a second. He did a great job finding a way on all weekend.”

The Eagles used a big inning to complete the sweep in game three. Trailing 2-1 after the first inning of game inning, Calera put up seven runs off eight hits in the bottom of the third inning. McKinney sparked the rally with a leadoff double to left field, followed by singles from Hall, O’Clair and Smith. Ellison doubled to right and Tyler Ferguson drove a triple down the left field line to make it 6-2 Calera. McKinney followed a few batters later with a two-out triple to score Glasscock, who drove in Ferguson with a single.

Jemison scored three in the fifth and one in the seventh, and Calera scored a pair of insurance runs in the fifth to wrap up the third game of the series. Kevin Dowdell recorded the win in the third game, striking out seven through 4 2/3 innings of work. He allowed five earned runs off three hits.

While Glascock scored eight times in the series and drove in two runs, O’Clair drove in seven and scored three times. Austin McKinney accounted for nine of the Eagles’ runs with five scored and four RBI, while Christian Hall had a team-high seven hits in the series, scored four runs and drove in four. Jacob Smith and John Ellison joined O’Clair with six hits. Ellison drove in four runs and Ferguson knocked in three.

Calera (14-6) wrapped up its week with a home loss to Thompson, 8-2, on Saturday and was scheduled to host Class 6A No. 5 Hillcrest-Tuscaloosa that afternoon for the Eagles’ fifth game in three days, but the game was canceled due to rain.

The Eagles are slated to play five games March 29-31 as part of pool play in the Beef ‘O’ Brady’s Hoover Buccaneers Classic, taking on Hoover (No. 9 in 7A), Spanish Fort (No. 2 in 6A), Austin, Spain Park, and Hartselle (No. 10 in 6A). The tournament will continue April 1 with bracket play.

“We want to expose our kids to the best baseball we can this time of year and facing quality arms day in and day out,” Simpson said. “We think it will pay off for us down the road. We want to continue to put them in situations where we have to show up every day and do the little things to be successful.”