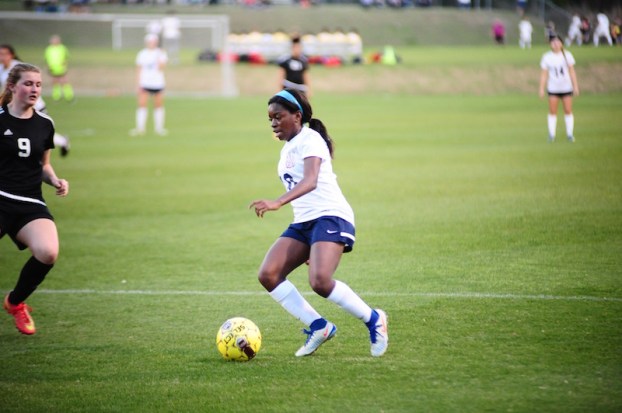 Oak Mountain's Hailey Whitaker had a hat trick in one half against Spain Park and helped the Eagles maintain the No. 3 ranking in Class 7A. (Reporter photo/Alec Etheredge)

Soccer is taking the week off across Shelby County thanks to schools taking their annual spring break. While teams are off resting up and enjoying their time off, the latest eurosportscoreboard.com rankings were released on Monday, March 26.

Featured inside the top 10 were a total of 14 teams from across the county, which has been the norm for most of the season. Seven of those 14 teams came in the girls’ division as several continue to prove their legitimacy as title contenders.

Just like the guys’ side of things, all three 7A teams from the county were featured not just in the top 10, but the top 7 of the rankings.

The Oak Mountain Eagles were the highest of those three teams as they found themselves at No. 3. After a loss to Parkview High School out of Georgia, the Eagles have won three consecutive games and only given up one combined goal to improve their overall record to 11-2-1.

Two of those three wins came against Spain Park and Mountain Brook in dominating fashion as they beat their area rivals 6-0 and 4-0 to improve to 3-0 in area play.

Spain Park had won six games in a row heading into their matchup with Oak Mountain, which shot them up to No. 4 in last week’s rankings, but the loss to the Eagles ended that win streak and dropped the Jags down one spot to No. 5. With an overall record of 8-2-1 and a .500 area record of 1-1, Spain Park will have to turn up the heat in the second leg of the season.

Sitting just two spots lower are the Thompson Warriors, who come in at No. 7. After losing three of their past four games, two of which were area losses, the Warriors have an uphill battle in one of the toughest girls’ soccer areas in the state. Still though, Thompson has a matchup with each of the two teams in front of them, No. 9 Hoover and No. 1 Vestavia, remaining on their schedule and can control their destiny by winning both of those.

Chelsea was the only team to grab a spot in the 6A rankings, which has been the norm for most of the season. The Hornets are the heavy favorites to come out on top in Area 7 and currently have a 1-0 record in area play. They have now won two consecutive games by a combined 13-0 and hold an overall record of 7-6, which was good enough for the No. 5 spot after managing through a difficult schedule.

Just like the boys’ poll, Briarwood was the only girls team to make the 5A top 10 as they grabbed the No. 6 ranking. The Lions (6-5-2) have played several top 10 teams from across many different classifications, but sit at 1-0 in area play and as the ultimate favorite in Area 8. Winners of two of their last three, they will have some important games after spring break.

Two of the county’s three 1A-3A teams were also featured in the rankings as Westminster at Oak Mountain and Indian Springs both found a way into the top 3 of the classification’s poll.

The Knights were the higher of the two sitting just behind Holy Spirit Catholic School at No. 2. After winning five in a row to start the season, they have now lost three of four all to ranked teams as they have hit a rough stretch of the schedule. Area play after spring break will be make or break, but they sit as the favorites to come out on top.

After not being ranked two weeks ago, Indian Springs’ girls have skyrocketed up the rankings to the No. 3 spot. They started the season with an average 4-3-1 record, but have since won four consecutive games only giving up a goal in one of those four as they have outscored opponents 20-2 during the win streak. If they continue the success after spring break they could make the leap all the way up to No. 1.

By ALEC ETHEREDGE | Sports Editor The week of March 27-31 marks spring break for most schools in Shelby County... read more