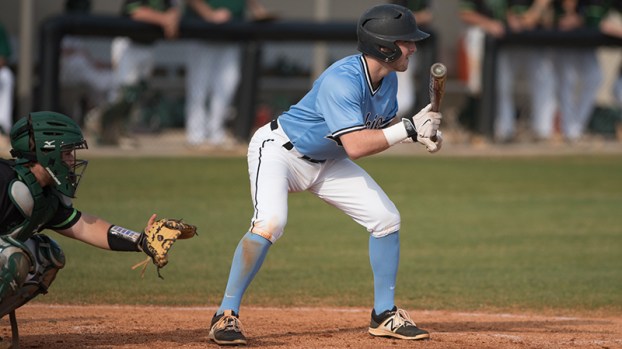 Helena split a doubleheader with 5A back-to-back champion Russellville on Saturday, March 25. (File)

HELENA–After coming off a three-game sweep of rival Pelham, the Helena baseball team ended the week of March 20 by facing off against back-to-back 5A state champion Russellville in a pair of games on Saturday, March 25 where they split the series to end the week with a 4-1 record.

In game one, Helena dominated to win 8-1, whereas, Russellville flipped the script in game two to get an 8-2 win to split the doubleheader.

Pitching dominance by Helena could best describe game one of the doubleheader the Huskies had in an 8-1 win over Russellville.

Helena pitchers Brooks Tolbert and Brett Walton combined to throw a one-hit shutout and got help from the Huskies offense that collected 11 hits in the game.

Tolbert lasted four and two thirds innings giving up one hit while striking out five on 81 pitches. Walton then entered in relief to record the final seven outs and allowed no hits and struck out one.

A pair of RBI singles by Nick Ragsdale and Braylon Moss in the bottom of the second got Helena on the scoreboard first to take a 2-0 lead.

The Huskies tacked on three more runs in the bottom of the fourth when Jake Busby plated Moss on an RBI single and Sam Praytor plated two runs later in the inning to make it 5-0 Helena.

The next inning, Ragsdale hit a two-run home run to essentially put the game away to make it 7-0.

Ragsdale, Moss and Davis each had multiple hits in the game for the Huskies.

Russellville would avenge the loss in game one with an 8-2 victory in game two thanks to a big sixth inning where they plated five runs.

Russellville was leading Helena 3-2 entering the sixth inning when the Golden Tigers started a two-out rally.

With runners on second and third with two outs, Russellville hit a two-RBI double and a three-run home run to make it 8-2.

The Huskies were unable to make up the deficit and fell 8-2 in six innings.

Troy Cordrey led Helena at the plate going 2-for-3 with one RBI.

Helena now sits at 16-4 on the season and will compete in multiple games the week of spring break in the Hoover Tournament.