Talent flowed freely about the stage for 2017 Unleashed at Helena High School. The show production is fit within one whirlwind week.

“We go home, think about what we want to do and come back for auditions on Friday,” explained Devin Creel. “Monday, we learn who has been selected; Tuesday and Wednesday are rehearsals, then we open on Thursday.” 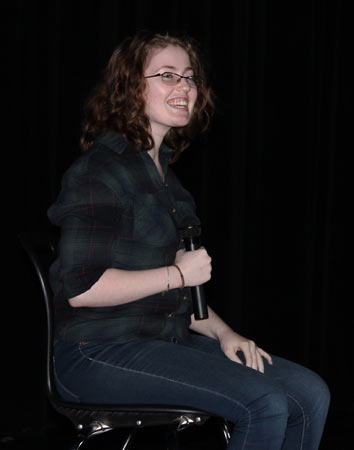 Bethany Leader performs “What Is Love” with Bailey Ireland (not pictured).

“The reason I chose to sing ‘You Love Me Anyway’ by the Sidewalk Prophets,” senior Jake Hall explained, “Is because it shows how much my faith is important to my life and how God has truly impacted me. Once I am on stage in front of the mic, the nerves all go away for me.

“I want to give a shout-out to Justin Ritondo who did a great job with his passionate guitar solo opening the second act.”

Ritondo cranked up the volume with Jimi Hendrix’s “Voodoo Child.”

“If you are really passionate about what you are singing or playing, you get lost in it,” added Ritondo. “I’m going to give my best, show the audience what I’ve got, but ultimately their opinion is not what I’m after.”

Ritondo, who is mainly self-taught, has been playing guitar since sixth grade.

“I was on a family trip and I heard ‘Welcome To the Jungle’ by Guns & Roses. From there, Slash became my inspiration to play more,” he said.

After Ritondo saw Slash live in concert, he continued teaching himself via Youtube videos.

“Then I discovered Jimi Hendrix and listened to his live albums to add more to my repertoire,” he said. “I took Hendrix’s basic structure of ‘Voodoo Child,’ but when it came to the break, I went improv. Once you get into the music, you are carried to a different place.”

And that is a place of confidence, agree these students.

“You put on your confidence and don’t make the audience nervous for you by fidgeting or showing your nerves. You make yourself happy and your audience is going to be happy along with you,” Ritondo observed.

The most important thing, they all agree, is how one feels about his or her performance.

“Others will have their opinions, but we have chosen thoughtfully to be ourselves.”

“I chose to sing ‘Lost Boy,’” said Devin Creel, “Partly because it is my mom’s favorite song and also because there have been times when I have felt alone and like a lost boy myself. When I was younger, I used to talk to the moon. I would be upset about bullying at school, and I would just talk about it to the moon, because the moon is always there.”

Creel had considered accompanying herself on piano, but didn’t feel she had the luxury of time to practice.

Ritondo said that his father applauded Creel’s performance and suggested the two consider getting together to play and sing.

Unleashed was hosted by Drake Bessant and Canna Brown, who sat down together and planned jokes and plays on words around each performance title.

Bessant himself read an original poem called “Five Year Olds Have Problems, Too.”

Bessant said he enjoyed the earthy rendition and interpretation of “What Is Love” performed by Bethany Leader and Bailey Breland.

The final performance was Savannah Key dancing to “The Beautiful People.”

Key has danced primarily at Dance Etc. and was also on the HHS Dance Team for two years.

“I put this dance together last minute,” she says, “And I wanted a fun and sassy dance that worked with the red fringed costume from my senior show solo. Dance has always been such a big part of my life; the activities I chose like cheerleading, ice-skating, softball—fell by the wayside, and now it’s been six years and I’m still loving it.”

What may the future hold for these talented teens?

Senior Drake Bessant plans to apply at the University of Montevallo, and Jake Hall will attend Mississippi College.

“I will continue to dance for fun,” Key said, “And plan to pursue college studies in marketing and interior design.”

Sophomore Justin Ritondo is considering applying to the Alabama School of Fine Arts.

Devin Creel would love to be an animator at Pixar or Cartoon Network, perform in the theater, and perhaps––someday––on Broadway.

Cooking up a fresh look

A redecorated kitchen can blend comfort, style and practicality Story by Laura Purvis Photographs contributed Our kitchens have long been the... read more